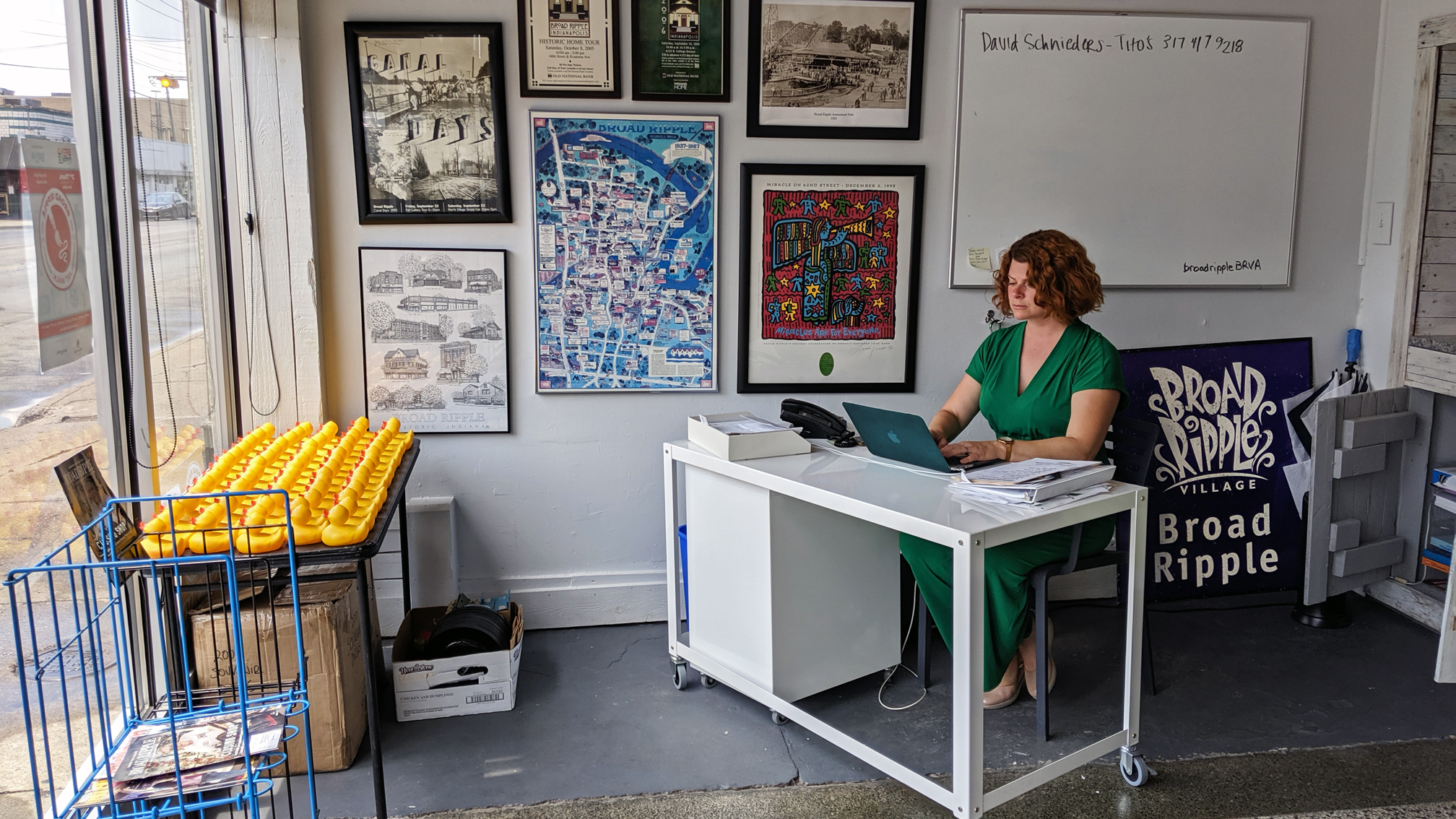 Councilor Colleen Fanning represents District 2 in Indianapolis, a chunk of the city that includes the business-heavy Broad Ripple and residential neighborhoods stretching up to border Carmel. (Drew Daudelin/WFYI)

Each member of the Indianapolis City-County Council is elected to be a voice for residents in their district. But it’s no small task to track the diverse, changing desires of tens of thousands of people, and these councilors work part-time.

Colleen Fanning ran a small wine business a few years ago. But at the end of 2015 she was elected to the City-County Council. Her second job would be part-time, and pays about $11,400 a year.

“So I was certainly expecting to be able to, you know, run my small business, and then do this as a part-time job," Fanning says. "And keep all the balls in the air, and that that would work.”

Fanning quickly realized that it wasn’t going to work. It was, as she says it, “extremely unmanageable.”

“My first year I got right around 60,000 constituent emails, which I've never heard of before. That was crazy. I mean, there's just no, there's no chance for success,” Fanning says.

These 60,000 emails were primarily questions, comments and concerns from residents who live in District 2, a chunk of the city that includes the business-heavy Broad Ripple and residential neighborhoods stretching up to border Carmel. Fanning says civic engagement in her district is really, really high.

“It's technically a part-time job, but in a district like District 2, it is absolutely a full-time job," Fanning says. "It can be a recipe for disaster, if you're not really flexible and adaptable and willing to kind of flip your life into a form that works. Which thankfully, I was able to do.”

Fanning downgraded her wine business into more of a part-time hobby, and got a more flexible full-time job at a neighborhood association.

But the emails kept pouring in. So Fanning did what most people would do in her situation – she started hiring interns.

“And that helped, but it actually, in some ways, it was more difficult because it would take months to kind of get them up to speed,” she says.

Fanning went through a series of interns, sometimes two at a time, during her first three years.

“And then finally, this year, I just broke down and said, ‘Forget this, I need to hire someone who knows what they're doing. And I'm going to pay them, it's not going to be an internship, it's going to be a paid position,’” Fanning says.

Her new assistant works part-time. But they know about local government. They sort emails by issue to help consolidate residents’ concerns and get them to Fanning in an organized way.

And Fanning says she uses nearly her entire council salary to pay them.

“I’ve kind of tried not to pay too much attention (laughs)...because you could see that as a little sad. But it's really not sad. I mean, this is a huge responsibility, my job is to do the best I can," Fanning says. "I don't think people realize that at this level of municipal government, a lot of councilors are completely on their own.”

The City-County Council does have full-time staff members whose responsibilities include helping councilors communicate with constituents. But there are three of them, and there are 25 councilors serving nearly one million people.

Amanda Rutherford is an assistant professor at the School of Public and Environmental Affairs at Indiana University. She says councilors face similar problems all over the country.

“Depending on the council that you're on determines the extent to which you have some kind of staff or not," Rutherford says. "At the local level that’s least likely to happen because the budgets are smallest, particularly for what we might call a citizen legislature.”

Rutherford says there’s another important consideration – whether city councilors themselves should be full-time.

“Because there's a trade-off of [the city's] financial costs in having a full-time legislature," Rutherford says. "But is there also a true benefit, in terms of the quality of responsiveness and effectiveness you're able to provide to the general public, even though the general public doesn't always know what it is that you are doing?”

Rutherford says the hours councilors work varies across the country, but that urban communities are more likely to have them work full-time. Some argue there’s benefit in a part-time citizen legislature, in that the person representing you is an active, working member of society.

Rutherford says salary increases could also alleviate some of these problems, but that it’s almost always a political challenge. Salaries for Indianapolis councilors haven’t gone up in more than 15 years.

“The local populace, including the legislators themselves, probably have to do a little soul searching to think about, 'What should we do?' And I don't know that there's a right or wrong answer to that, necessarily. There’s going to be some values that feed into answering that question,” Rutherford says.

There are signs that changes are being considered more seriously, and some could come with approval of the 2020 budget.

Rutherford is part of a research team to study the council’s effectiveness, with a report coming later this year. Council leaders say they’ll pay close attention to what they find.

Tags:Colleen FanningIndianapolis City-County CouncilCity Councillocal government
Support independent journalism today. You rely on WFYI to stay informed, and we depend on you to make our work possible. Donate to power our nonprofit reporting today. Give now.