As IPS prepares to share final restructuring proposal, some community members are worried

Just days before Indianapolis school leaders are expected to release the final proposal to overhaul the district, many community members remain critical of the plan that doesn’t specify how much it would cost the district, what the district will do with closed buildings and the amount of money IPS would save long term.

During public and school community meetings, parents voiced concerns about the potential impacts on students’ education and safety at the new proposed middle schools, which will serve students in sixth to eighth grades.

Parents and advocacy groups created multiple petitions to pause the vote. The four candidates running for the district school board in the November election all said they'd vote against the current plan.

Yet IPS Superintendent Aleesia Johnson and all seven members of the school board maintain the sweeping changes will improve academic performance and position the district to address years of enrollment declines.

Students and parents see “merging” as a “takeover”

Seven elementary schools would close or merge if the current version of the plan is approved next month by the IPS board. A painful decision, Johnson said, based on a combination of aging facilities and enrollment declines among the surplus of district buildings.

Three of those schools will face what some parents describe as a “takeover” — the school building remains open, but the unique academic programs end. That means many teachers and staff will likely be displaced, and new leadership and educators will transfer in from another school. The district describes this process as “merging.”

Some parents at the Near Southeast side Frederick Douglass SUPER School 19 feel betrayed by the Rebuilding Stronger plan. As part of the plan, nearby Paul Miller School 114 would close and students and staff transfer to School 19.

Over 60 children, parents and teachers sat in the School 19 gym during a late September meeting with district officials, wearing white shirts that said, “Save our students. Save our SUPER School. Save our Staff.” Roughly 24 teachers and staff members stood in the back of the gym and wore blue shirts with the same message.

“Stop calling this a merger, this is a takeover," mother Malissa Terry tearfully told district staff.

Terry said her daughter has thrived at School 19, after facing punishments related to a verbal disorder at a former school. She’s concerned her daughter, and other students like her, won't adjust well to the proposed changes.

“I’ve never been to a school where these teachers are as understanding and kind,” Terry said. “They take time to love the children and to get to know them.”

Many parents said the decision to merge schools shouldn’t be determined solely by academic performance. Jaquelinne Vazquez Rodriguez, speaking in Spanish, said the school staff have a strong emotional connection with the students that parents haven't found at other schools.

“I came here to this country to give my kids the opportunity that I didn’t have back home, and you’re kind of taking that away right now,” Vazquez Rodriguez said in Spanish.

Fifth grader Gloria said some students have gone around the school and collected signatures for a petition to prevent the school from closing.

“I thought this was supposed to be the kids’ decision,” she said to district staff. “So none of them are listening to the kids when they’re saying they don’t like what’s happening.”

In response, Brian Dickey, IPS director of innovation schools encouraged Gloria and other students to submit feedback to the district about the proposed plan. Families had until last Friday to share feedback online. 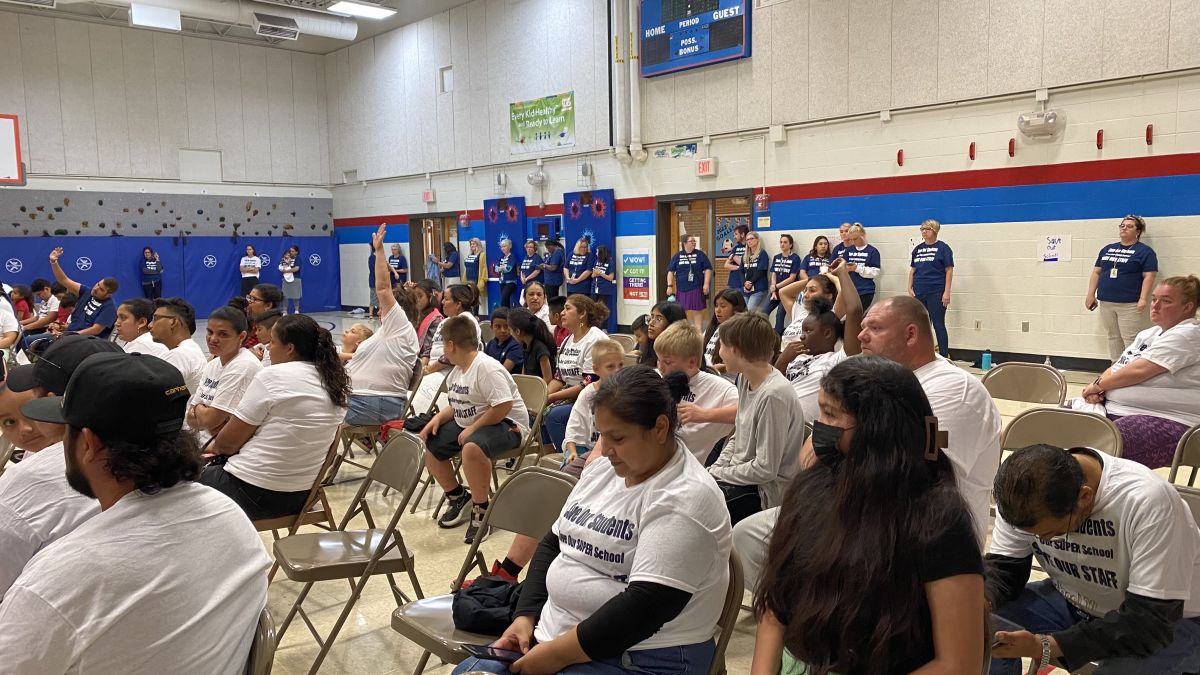 Why IPS wants to merge School 19

School 19 operates under an action-based learning model called SUPER – or students understanding through powerful and energetic routines – that focuses on the relationship between motor and cognitive processes.

In 2018, the school’s new principal and local education reform groups Stand for Children and The Mind Trust supported School 19 to receive “innovation” status from the IPS school board — a change that allows a nonprofit board to run the school independently within the district.

A large number of teachers rejected the plan, and pleaded with the district not to approve it. But the board voted 4-3 to grant the innovation status. The principal who sought the dramatic change left less than two years later.

Now, the Rebuilding Stronger plan calls for the end of the innovation contract and the SUPER model. Dickey said the district cited students' math and English test scores in the past three ILEAN exams as the reason to not renew the SUPER School innovation contract. Next fall School 19 would be run by the current School 114 staff and managed directly by the district.

Students who decide not to stay at the school will have enhanced priority and receive transportation within their zone, which is zone 4. IPS will reach out to families with students receiving special education services to discuss future accommodations.

One teacher at the September meeting asked why the district is using test scores from academic years impacted by the COVID-19 pandemic to justify closing the school while the Indiana Department of Education has urged caution when comparing 2021-2022 scores to other years due to pandemic learning loss.

School 19 has also seen an increase in English Language Learning students over the past few years. In 2018, almost 27 percent of School 19 identified as ELL students. In 2021, nearly 32 percent of students were non-English speakers.

Dickey said despite the pandemic, School 19’s low performance made the district feel it needed to act in urgency to address issues around grade configurations and enrollment zones in order to improve student academic performance.

Will IPS be able to find enough teachers next year?

The IPS plan would close schools in 2023, and grades would be reconfigured and new buildings would open for the 2024-25 school year. That means there will potentially be one-year contracts for some 6-8 grade teachers.

At the meeting, a seventh grade English teacher said she’s concerned how the district will be able to hire enough teachers for one-year positions, especially amid an ongoing national teacher shortage caused by the pandemic. The educator asked to remain anonymous to make sure she doesn’t receive unfair treatment from the district if she applies for a different job with IPS.

“As a teacher, and a relatively new teacher at that, I don’t think anybody’s gonna want to be hired here for one year,” the teacher said to the cheering crowd. “And that puts a huge burden on our sixth and seventh graders who are going to be in seventh and eighth grade next year.”

School 114 currently serves K-6 graders, but the elementary school would have to serve any middle schoolers who would like to remain at the school during the 2023-2024 academic year.

“So you’re bringing more children into these classrooms so that they will have less individual attention,” said a parent at the meeting. “Doesn’t that contradict the proposal?”

Dickey said the district acknowledged the plan, if approved, would lead to increased enrollment at the school during the 2023-2024 school year. But he said increasing enrollment during this transition year would provide the district with more resources long term.

Many parents were concerned about the job security of the current staff. Innovation charter school staff are not allowed to be members of the IPS union, per state law, so their contracts will be terminated at the end of the school year if the plan is approved. Innovation charter school staff can apply for open positions with IPS, but Dickey said he doesn’t know how many staff members the district will hire to stay at the school. He said interested staff will be able to interview for open positions at the merged school.

A final version of the overhaul proposal is expected to be released Thursday. The IPS board of commissioners are scheduled to vote on the plan Nov. 9.

Eric Weddle contributed to this story.

Tags:Rebuilding StrongeripsSuper School 19Innovation Network Schools
Support independent journalism today. You rely on WFYI to stay informed, and we depend on you to make our work possible. Donate to power our nonprofit reporting today. Give now.