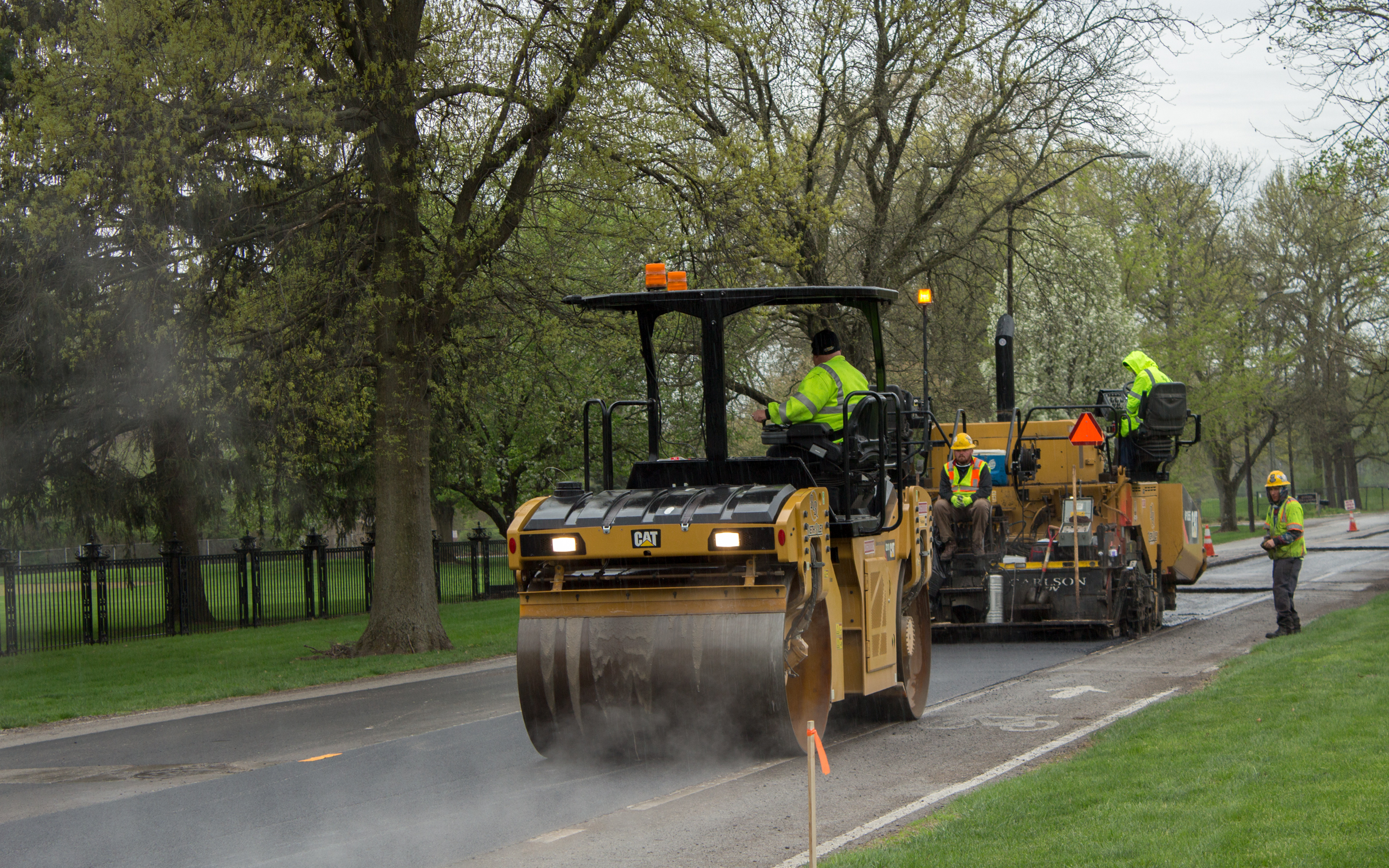 A road crew works in the rain on the city’s west side. A process called "strip-patching" involves tearing up and replacing large sections of a damaged road, not just filling individual potholes. (Drew Daudelin/WFYI)


This Tuesday is primary election day in Indiana, and road conditions have emerged as a major talking point in races for the 25 seats on the Indianapolis City-County Council. From WFYI’s City Desk, Drew Daudelin reports on some of the challenges behind this complex issue.

Keith Potts is in his first campaign for City-County Council. The 29-year-old Democrat is in a strip mall space on a Monday night, coaching volunteers about what to tell voters on the phone.

KEITH POTTS: One of the things that we're finding is...one of the most important centerpieces of the campaign this year is talking about improving our infrastructure.

POTTS: We all have seen potholes on the road, we've all gotten stuck at six red lights in a row, we want to make sure that our systems that exist, just the plain bread and butter things of our infrastructure, the roads and the sidewalks, that they're working in the most efficient manner as possible.

DAUDELIN: The last two winters have ravaged city streets in Indianapolis. The New York Times, in an article this year, referred to the city as “one large pothole.” City officials said they were caught off guard by changing temperatures that caused damage too quickly. But old infrastructure has plagued the city for decades.

COLLEEN FANNING: We have done massive amounts of resurfacing. I mean, we're really just kind of at the tip of the iceberg in terms of what our needs are.

DAUDELIN: That’s Colleen Fanning, the Republican incumbent Potts will face in the election this fall. Fanning, like many on the council, says city leaders have underspent on infrastructure for decades. And it’s left current leaders with a lot to catch up on, forcing them to prioritize repairs on streets and sidewalks that need it the most.

FANNING: It's a bit like the oxygen mask thing on the plane where you have to put, you know, they always say, put the oxygen mask on yourself before you help the child next to you, or the elderly person next to you. And that's kind of what we're doing with infrastructure now.

DAUDELIN: A road crew is working in the rain this morning on the city’s west side. They’re tearing up and replacing large sections of a damaged road, not just filling individual potholes. The city says it’s filled 250,000 potholes in the first four months of the year. It has a plan to invest $400 million into infrastructure over the next four years, but even that’s not enough. Officials say the fundamental problem is how they get funding from the state.

The three big road funding sources for the city are gas, excise and wheel taxes, all of which come through the state. The city can use this money to repair and maintain its 8,438 lane miles of roads.

PARKER: Keystone Avenue, you know, one of the busiest streets in Indianapolis, in the state, that is a local street, is six lanes across…we only get money for one lane. So it's the equivalent of sort of a county rural road. And the question is, is that fair?

DAUDELIN: This is the result of the state’s road funding formula, a common source of anxiety for Indianapolis leaders hoping for a long-term solution. The formula also does not take traffic volume into account.

Jared Evans is the incumbent Democratic councilor from District 22, a mostly suburban area on the southwest side. He says the formula means residents in his district give more money than they should to communities around the state.

JARED EVANS: That's difficult for me to accept that, when my neighborhoods, you know, our people, the entire city, we're spending hundreds if not thousands of dollars repairing our vehicles, because we're hitting potholes. We cannot keep up with the infrastructure that we have.

DAUDELIN: Some councilors, like Fanning, hope creative solutions like public-private partnerships can make the difference. Evans thinks the state formula has to change.

EVANS: It is up to us, as city councilors, the leadership of the city, to be having these conversations with our state representatives, our state senators, constituents, citizens of this city...need to be talking to their state reps and their state senators and asking what are they doing to address the inequity that is in the state's road formula.

DAUDELIN: But the Statehouse, controlled by Republicans, has had a rocky relationship with Indianapolis for years. With Democrats running the council, and the chance of even more districts flipping in their favor, making that conversation happen could turn a largely bipartisan issue into a complicated political challenge. For WFYI, I'm Drew Daudelin.

Tags:potholesinfrastructureelectionIndianapolisCity-County Councilroad funding
Support independent journalism today. You rely on WFYI to stay informed, and we depend on you to make our work possible. Donate to power our nonprofit reporting today. Give now.

Primary election day is Tuesday, May 7. More than 60 candidates are seeking their party's nomination to run for 25 Indianapolis City-County Council seats.