Judge Sarah Evans Barker has denied Hill's motion to amend the judgment. In her order Barker says both of Hill's objections are without merit.

You can read the judge's full order below.

The Indiana Attorney General’s office is defending its decision to intervene in a federal court case on early voting centers, after harsh criticism from the Secretary of State.

Last month the Marion County Election Board agreed to create new early voting centers in future elections – a decision made during a lawsuit settlement agreement.

Attorney General Curtis Hill’s motion to withdraw that agreement was met with criticism from Secretary of State Connie Lawson, who in a statement called Hill’s filing "reckless."

Fisher says the lawsuit agreement’s indefinite nature conflicts with state statute, which requires a unanimous vote from the Election Board before new early voting centers are created.

"The board seems to be purporting to bind itself going forward, as opposed to abiding by the statute, which says that any resolution authorizing these precincts would expire by the end of the year," Fisher says. "That way a new board, new members, new considerations can come into play, and the board can evaluate it from cycle to cycle."

The Secretary of State also says she was not consulted about the decision to file the motion. Fisher says since Lawson was dropped from the lawsuit months ago, the office didn’t feel it was necessary.

Tags:Connie LawsonCurtis Hillearly votingIndiana Attorney GeneralIndiana Secretary of Statelawsuitsatellite voting sites
Support independent journalism today. You rely on WFYI to stay informed, and we depend on you to make our work possible. Donate to power our nonprofit reporting today. Give now. 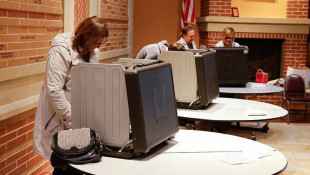 The creation of new early voting sites requires a unanimous vote from the Election Board. In his motion Attorney General Hill says that vote never happened.