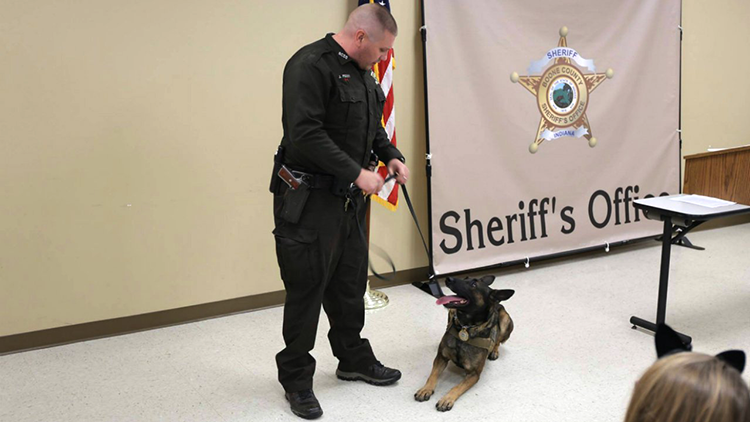 
Criminal charges have been filed against two men involved in the fatal shooting of Boone County Sheriff's Deputy Jacob Pickett.

Anthony Baumgardt is the suspected shooter. He is being held in jail on six counts including murder, possession of methamphetamines, and carrying a gun without a license.

Another man, John Baldwin Jr., was with Baumgardt at the time and is charged with criminal recklessness, auto theft, and leaving the scene of an accident.

"I am angry, I am so angry," Nielsen says. "I am sad, I am heartbroken, and I am devastated. But we are not alone. Our community and our brothers and sisters across this country have come together in our time of need."

According to an affidavit, officers were serving an unrelated arrest warrant on the morning of Friday, March 2 when Baldwin Jr. was identified as someone wanted on warrant. When officers instructed Baldwin Jr. to stop his vehicle, Baldwin Jr. refused and a chase ensued.

An investigation is ongoing. Boone County Prosecutor Todd Meyer says Baumgardt’s initial hearing in front of a judge is expected as soon as Wednesday, March 7.

Baldwin Jr. is also eligible as a habitual felony offender, and Meyer says he recieved that charge.

Police say Deputy Pickett’s visitation will be held in Indianapolis at Crown Hill Funeral Home on Thursday, March 8 from 2 to 7 p.m.

His funeral is scheduled for Friday, March 9 at Connection Pointe Christian Church of Brownsburg.

Tags:officer-involved shootingBoone CountyBoone County Sheriff's DepartmentJacob Pickett
Support independent journalism today. You rely on WFYI to stay informed, and we depend on you to make our work possible. Donate to power our nonprofit reporting today. Give now.

The city has been in a nearly 10-year legal battle over the Towne and Terrace complex near the intersection of 42nd Street and Post Road.
Read More