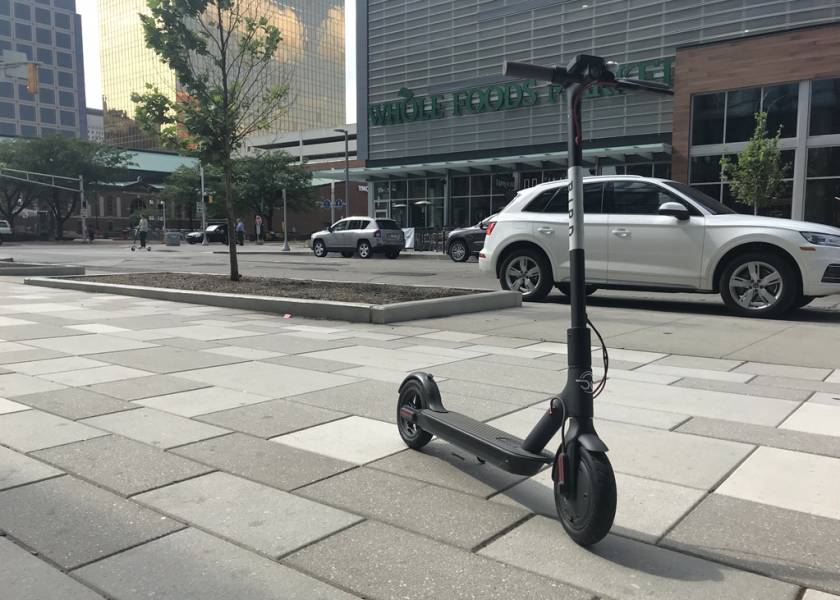 Driving a motorized device on sidewalks and other pathways in Indianapolis is against the law, but many who use the scooters do just that, and some councilors say companies haven't done their job to educate users on what the rules are. (Drew Daudelin/WFYI)

Indianapolis asked the shared motorized scooter company Bird to stop operating in the city just a few days after it started in mid-June, citing legal concerns around the new business model. The City-County Council was working through a proposal to ban the service.

Now city councilors want to compromise. Committee members Thursday approved an ordinance that requires companies like Bird and Lime to purchase a $15,000 per year license, pay $1 per day/per device, and to agree on a series of stipulations.

“Whether or not they require us to do certain things, safety related, we’re going to do them anyway because that’s what we do as a company,” Wilde says.

Wilde says Lime has been in talks with the city for months to work out an agreement, but says Bird jumping the gun forced Lime to do the same.

The ordinance, some of which was presented in the meeting, was written by the city's Department of Business and Neighborhood Services. Some councilors, like Republican Janice McHenry, voiced frustration over the lack of time given to read the proposal before voting on it.

McHenry also critized both companies for starting business before the city came to an agreement.

"These companies seem to be bullying our city," McHenry says.

Driving a motorized device on sidewalks and other pathways in Indianapolis is against the law, but many who use the scooters do just that, and some councilors say the companies haven't done their job to educate users on what the rules are.

To address this the ordinance includes a variety of regulations. Devices must be parked upright, with at least 6 feet of unobstructed passage in the public right-of-way. They can only be parked in grassy areas that are non-landscaped. And they cannot be parked in places like loading zones, alleyways, or driveways.

One group is worried unregulated electric scooters are a safety hazard, and wants to put restrictions on the service to prevent potential issues. The other is worried about local government stifling innovation and the free market.

But the ordinance passed, the city says, only deals with operator regulations, not restrictions on the user. Some who commented from the public argued that this ignores the more immediate concerns around public safety.

The ordinance passed with only one vote against, from McHenry. It goes now to the full council, where a vote is scheduled on July 16.

It remains unclear whether the companies will keep doing business until that date. Wilde says Lime will pull the service, but only if Bird agrees to as well.

Council President Vop Osili says while he supports the new technology coming to Indianapolis, he's worried about the message the city sends if Bird and Lime can illegally operate, without consequence, for over two weeks.

Tags:BirdLimeelectric scootersregulationsIndianapolis City-County Council
Support independent journalism today. You rely on WFYI to stay informed, and we depend on you to make our work possible. Donate to power our nonprofit reporting today. Give now.