INDIANAPOLIS -- He wasn't gone for long. Fewer than six months after resigning as Mayor Greg Ballard's public safety director, Troy Riggs will return to city government in January to be the chief of police under Mayor-elect Joe Hogsett.

Hogsett made that announcement, along with saying fire chief Ernie Malone will stay on to lead the Indianapolis Fire Department, at a Tuesday afternoon press conference.

Riggs will help curb, as Hogsett called it, "a crime epidemic" in the city.

"With decades of experience and a committment to innovation and creativity, I am confident that this public safety team can take on this enormous challenge," Hogsett said.

Current Indianapolis Metropolitan Police Department chief Rick Hite announced his resignation in conjuction with Hogsett's press conference. Hogsett showed little public support for Hite during his campaign or in the days after the election.

Reached Tuesday evening, Hite said he's got a lot of options and isn't ready to end his career. "It's been a great ride," Hite said. "I enjoyed the community, I enjoyed the department, it's been outstanding."

Riggs began as a beat cop in his hometown of Louisville and helped leaded a merger of city and county police departments there. He was then the chief of the Corpus Christi Police Department in Texas. He was Ballard's public safety director for three years.

He came to that roll following a scandal and shakeup of IMPD and the public safety department. Riggs led a data-driven intitative within public safety to identify Indianapolis' most crime-ridden neighborhoods and start a program to increase services there.

"We'll continue to look at those areas," Riggs said, "but remember crime moves and we want to be flexible."

Riggs resigned in early August to take a position at IUPUI researching public safety. He will have to go through a law enforcement certification process in order to be a police officer in Indiana.

IMPD will interact better with the community, Riggs said, and will work to quell what he sees as a "fear of crime" among resident.

"We need a department that talks about community policing and makes sure it's a priority and not just a program," Riggs said.

Hogsett pledged during his campaign to put an additional 150 police officers on the street. Riggs said he'll continue to work toward adding more beat cops.

Malone, the current IFD chief, has been with the department since 1986 and has seen IFD's service area grow as it's merged with some of the township fire departments. He oversees 1,200 civilian and sworn employees.

"I still don't have the words of how honored I am to be the chief of this great organization," he said. 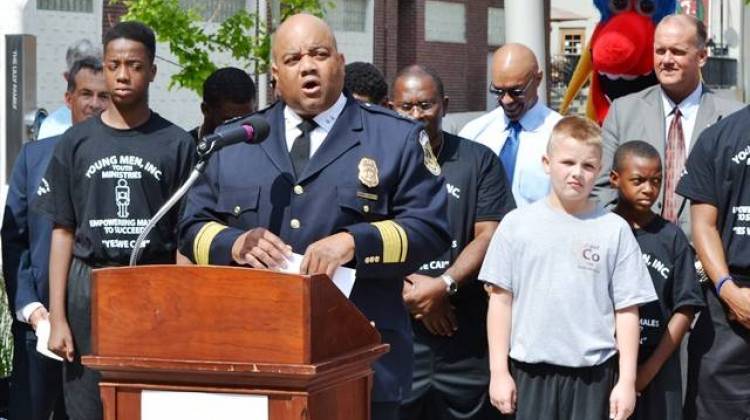 Tags:Joe HogsettIMPDTroy Riggs
Support independent journalism today. You rely on WFYI to stay informed, and we depend on you to make our work possible. Donate to power our nonprofit reporting today. Give now. 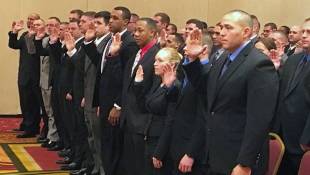 The recruits are the second wave of an initiative launched by Mayor Greg Ballard in January to add more than 100 new officers to IMPD.