Here’s Why Police At Your School May Lack Specialized Training

Students returning to class this month may be interacting with an unknown number of police officers in Indiana schools that haven’t been specially trained for the job.

Chase Lyday, director of the Indiana School Resource Officers Association, is on a mission to change that.

Lyday wants mandated school resource officer training so that all police who work in school environments understand the basics of the job, including adolescent brain development, working with students with special needs and de-escalation techniques.

But so far, Lyday’s push to get lawmakers to agree with him has been unsuccessful.

The current state statute mandates that any officer claiming to be an SRO must undergo a 40-hour basic SRO training from the National Association of School Resource Officers, the Indiana Law Enforcement Training Board or another program approved by that board.

But there are police officers working in Indiana schools who have not received this training, Lyday said, and they’re not required to so long as they don’t claim the title of SRO.

For example, the Indianapolis Public Schools Police Department provided the 40-hour basic SRO training to half of the agency’s 38 sworn officers in June, according to IPS Police Chief Tonia Guynn. She said, prior to the training in June, about a quarter of the department’s officers had received the training.

“I actually had SRO training years ago, like when I first came into the department, but there were many officers that hadn't,” Guynn said. She said the agency plans to train the rest of its officers by the end of next year.

Lyday applauded IPS Police for providing the training to its officers, but he said there should be consistency across school corporations.

“Without that mandate, right now, the decision is left to the individual school districts and police departments on whether or not to train their officers,” Lyday said.

The number of police in schools has skyrocketed over the last four decades. In 1975, only 1 percent of schools nationwide reported having officers in their buildings, and by 2018, about 58 percent reported having at least one law enforcement officer present. As of 2019, at least 28 states have some statutory training requirement for police or other security personnel in schools, but what is included in the training and who must undergo it varies widely across the country.

In Indiana, it’s unclear how large the police presence in schools is, because the number of officers in schools is collected but not disclosed to the public.

Police in schools have come under scrutiny in recent years for their treatment of students, particularly children of color. An analysis of student arrest data from the Indiana Department of Education shows that Black students in Indiana were arrested at more than twice the rate of white students across the school years 2016-17 through 2019-20.

“School resource officers like me and those I work with get so frustrated to answer questions about data showing disparity, data showing disproportionality, high arrest rates, because many school resource officers in the state who have been trained appropriately are being lumped in with some officers who have not been and have a much different philosophy on school based policing,” Lyday said.

In recent years, Indiana lawmakers have twice tried to pass legislation that would mandate basic SRO training for all police working in schools. A bill authored by Republican Sen. Travis Holdman died in committee earlier this year; and lawmakers rejected a similar bill authored by Republican Sen. Michael Young in 2020, citing concerns about the availability of the training and fears that such a mandate would lead to a drop in the number of cops in schools.

Raatz said “it's been a comedy of unintentional differences of opinion and pieces of legislation that have passed that caused us to get to where we are today.”

In 2012, the Indiana General Assembly established the Secured School Fund, which allowed schools to use grant funding to pay for SROs. And in order to be “certified” as a SRO, law enforcement officers needed to complete the 40-hour basic training.

But during the 2020 legislative session, the Secured School Fund was modified to allow schools access to grant money to pay for a certified SRO or a law enforcement officer.

“This change was designed to help rural schools who want to have a trained law enforcement officer in their school, but don’t have any certified SROs in the area who could serve in that role,” wrote David Hosick, a spokesperson for the Indiana Department of Homeland Security, in an email. IDHS manages the state’s Secured School Safety Grant Program.

Raatz said he’s in favor of the training requirement, but that he also needs to do more research on the subject.

“We need to take a serious look at the different things we are doing today and come to a comprehensive plan for uniformity,” Raatz said. 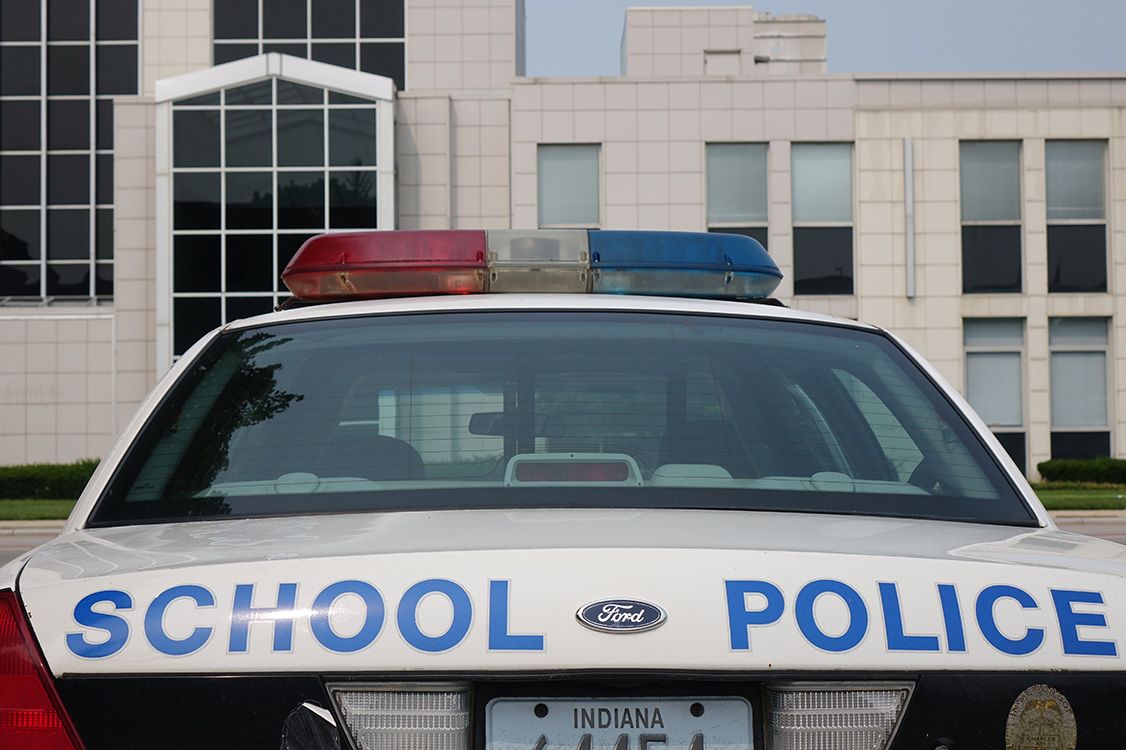 Why Train Officers To Be SROs?

The NASRO method of school-based policing hinges on training officers in what’s called a “triad model,” said D.J. Schoeff, board president of NASRO, a sergeant with the Carmel Police Department and a SRO for Carmel Clay Schools.

The triad model includes three main job duties of the SRO: acting in a law enforcement capacity to ensure safety of students and staff on campus, serving as a guest speaker in classrooms educating students about safety and the law, and providing informal mentorship and counseling to students.

Schoeff said both school administrators and officers may lack an understanding of this triad model and what his organization views as the correct role of the SRO. It frustrates him when hears about police officers who “interject themselves in a law enforcement capacity” when they should be serving as mentors for students, or when school administrators call upon school-based cops to intervene in a discipline issue.

“That’s not our role,” Schoeff said. “Our role is not to deal with school discipline. Our role is to try to help our kids make good decisions.” 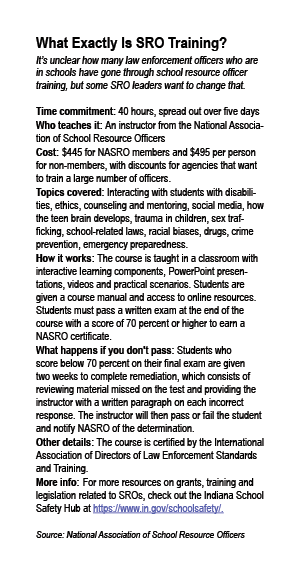 Both Lyday and Schoeff say it's unreasonable to expect an officer trained to patrol streets to be able to understand the role of an SRO without specialized training. Schoeff said no one would question the need for specific training for SWAT officers or detectives — beyond what's taught in the police academy.

Lyday said part of the problem in Indiana lies in the different models schools use to get police into their buildings. He said it's harder to ensure officers are properly trained if they aren't employed by a school district or if their assignment in the district isn't covered under a memorandum of understanding with a municipal police department.

The models of school-based policing in Indiana are:

Models where different officers rotate in and out of school buildings lack consistency and "you also run the risk of having those officers come in who are very good at patrol activities, but don't have the training, understanding or the desire to be around kids all the time," Lyday said.

He said models in which reserve or off-duty officers contract directly with school districts can also create problems if schools can't ensure those officers are trained or how to hold them accountable for their actions while serving the school district.

“There are some police departments who have officers who work every day in the district, but have never been trained [as an SRO],” Lyday said.

Contract With The Indiana Department of Education

The Department of Education has partnered with NASRO to provide the 40-hour basic SRO training in regions of the state that are “underserved with trained SROs (ranging from rural to urban and everywhere in between),” according to Holly Lawson, a spokesperson for the Indiana Department of Education. Lawson said the state will fund training for up to 180 officers over the next two years. She said IDOE is still in the process of determining underserved regions of the state where these trainings will take place.

Schoeff, with NASRO, said the partnership with the IDOE sends the message this kind of training is valuable and important.

Still, he agreed with Lyday that it will take action from state lawmakers to correct the problem.

If officers continue to work in school settings without SRO training, Schoeff said he worries that will lead to increased arrests of students, among other problems.

“Police come in and they respond for the sake of keeping peace. And there's more physical altercations, if you will, between law enforcement and more injuries, more problems, more litigation. You know, it just goes on and on and on when you're not trained the right way,” Schoeff said.

Tags:Indianapolis Public Schoolsschool policeschool resource officersIndiana General AssemblyK-12arrest
Support independent journalism today. You rely on WFYI to stay informed, and we depend on you to make our work possible. Donate to power our nonprofit reporting today. Give now. 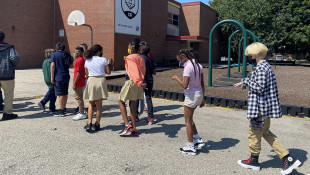 Summer is officially over for students in the Indianapolis Public Schools district. IPS students started their first day of school Monday during their third year since the COVID-19 pandemic began. 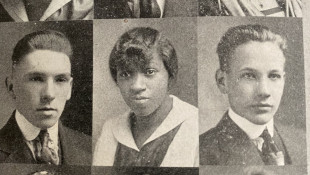 Randy Wilson was rummaging around a local flea market when he stumbled across a pristine yearbook from his old Indianapolis high school. From there, he started a collection that became a trove of history on Arsenal Technical High School and its graduates. 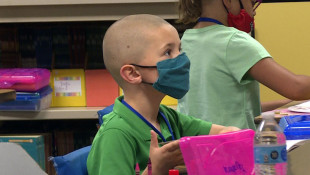 The U.S. Centers for Disease Control and Prevention announced last week it recommends people wear masks in schools as COVID-19 cases surge. It's prompting some Hoosier schools to revise their policies, while others are waiting to make decisions based on local COVID-19 data, as many near – or have already started – a new academic year.