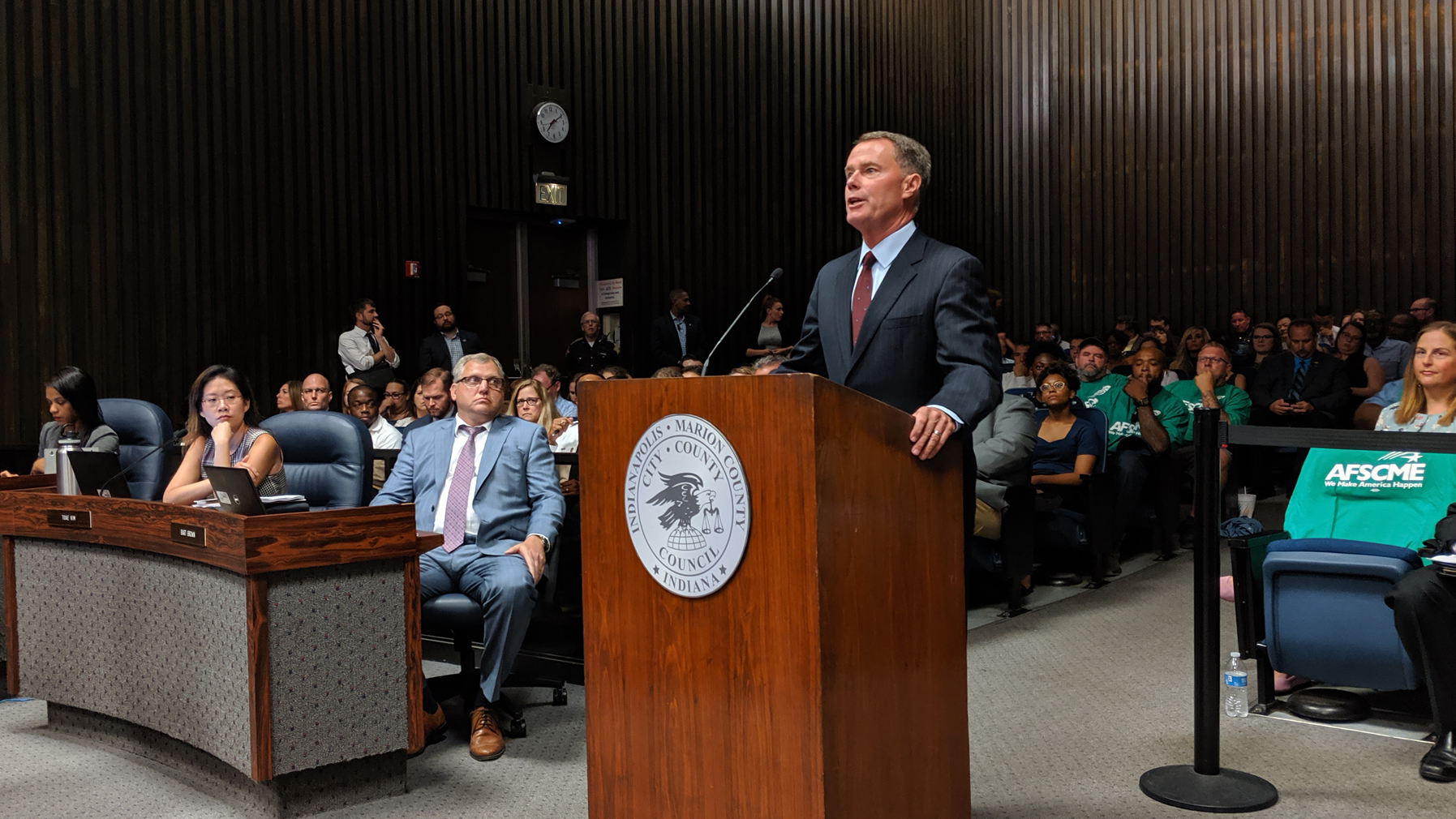 As he has in recent years, Mayor Joe Hogsett emphasized the bipartisan, county-wide collaborations that led to the creation of his administration's balanced budget. (Drew Daudelin/WFYI)

The city's budgeted revenue for next year is $1.2 billion and its budgeted expenses are just slightly lower, leaving a small surplus of $171,441.

Mayor Joe Hogsett introduced the budget to the City-County Council, which will vote on its approval. As he has in recent years, Hogsett emphasized the bipartisan collaborations that led to its creation and the fact that it creates no new local taxes.

"It is with great pride and gratitude that tonight, I present for your consideration, a budget that builds off your hard work over these last three years, and advances our strategy of fiscally responsible investments in our neighborhoods, and in public safety," Hogsett says.

The largest allocations from the city go to three categories: 22% for public safety initiatives, 25% for the broadly defined category "public services," and 38% for criminal justice services.

In his speech Hogsett highlighted a $500,000 investment to address food access issues. He says the city will partner with Indiana University's Sustainable Food Science Institute to bring food security experts into food deserts, to work with the community facing the problem.

"In this way, the best of local and institutional knowledge can attack the problem together," Hogsett says.

Infrastructure continues to be a focus for the administration – the budget includes $118 million for roads, resurfacing, bridges, sidewalks and greenways in the city. And the mayor says the city will also work to grow the Department of Public Work's staff.

"This budget represents the beginning of a multi-year effort to staff and equip DPW at levels we have not seen in a generation for next year," Hogsett says. "This means funding for added shifts. Gone will be the days of a single-day shift for our hard working men and women in DPW. With this budget, it will be the norm to see DPW out working from sunup to sundown without requiring overtime expenses."

Hogsett also highlighted a number of public safety initiatives. The budget allocates $1.2 million to fund a fully implemented police body camera program at the Indianapolis Metropolitan Police Department, but the city won't decide whether that program actually happens until later this year.

The budget also includes a 2% raise for Indianapolis Fire Department and IMPD officers, an $8.8 million total increase across both agencies. And as the city announced earlier this year, starting yearly salaries for recruits in IFD and IMPD will increase to $51,000.

The city is also hoping to maintain its planned growth for IMPD, to increase the number of its officers and fully transition to small district beat policing.

"Now, when combined with the expansion of our city's violence reduction grant program, our peacemakers program and the witness protection program, this council will have more than doubled the amount invested in community-based anti-crime efforts over the last four years," Hogsett says.

The Hogsett administration says its multi-year strategy from 2016 to 2019 focused on balancing the budget without tax increases, investing in infrastructure, and protecting the city's credit ratings. Officials says implementing these "dramatic changes" got them to where they are today.

Another factor officials attribute to their balanced budgets – revenue growth has consistently surpassed what the city budgeted for the City-County Council. For years the city says it conservatively estimated the amount of revenue it would have, so it wouldn't plan to spend money that becomes unavailable.

City officials say their fiscal strategy going forward is to double down on income tax, in part because property taxes are capped. The city saw a $22 million growth in income taxes this year.


Read below for more details on how the city plans to spend its money next year:

The Department of Public Works is also in the process of changing the way it organizes crews around the city, breaking up its three large districts into 20 smaller "zones." One crew will be in charge of each zone, a change the city hopes will help with accountability, consistency, customer service, and DPW's ability to do more proactive work.

This is the first time body cameras have been budgeted by the city, but it's not a guarantee that the devices will be used. IMPD is about halfway through its body camera pilot program, and is set to evaluate it soon.

IMPD Chief Bryan Roach says the city plans to create a committee in the end of September. The group will meet to hear how the city and the community thinks the pilot program went, then help decide whether a body camera program will be implemented.

The money allocated in the budget means the city would have enough for the program (enough to put a camera on every officer in the city, Roach says), if it decides to do it.

Tags:IndianapolisbudgetCity-County Councilcity budgetJoe HogsettinfrastructurePublic Safety
Support independent journalism today. You rely on WFYI to stay informed, and we depend on you to make our work possible. Donate to power our nonprofit reporting today. Give now.