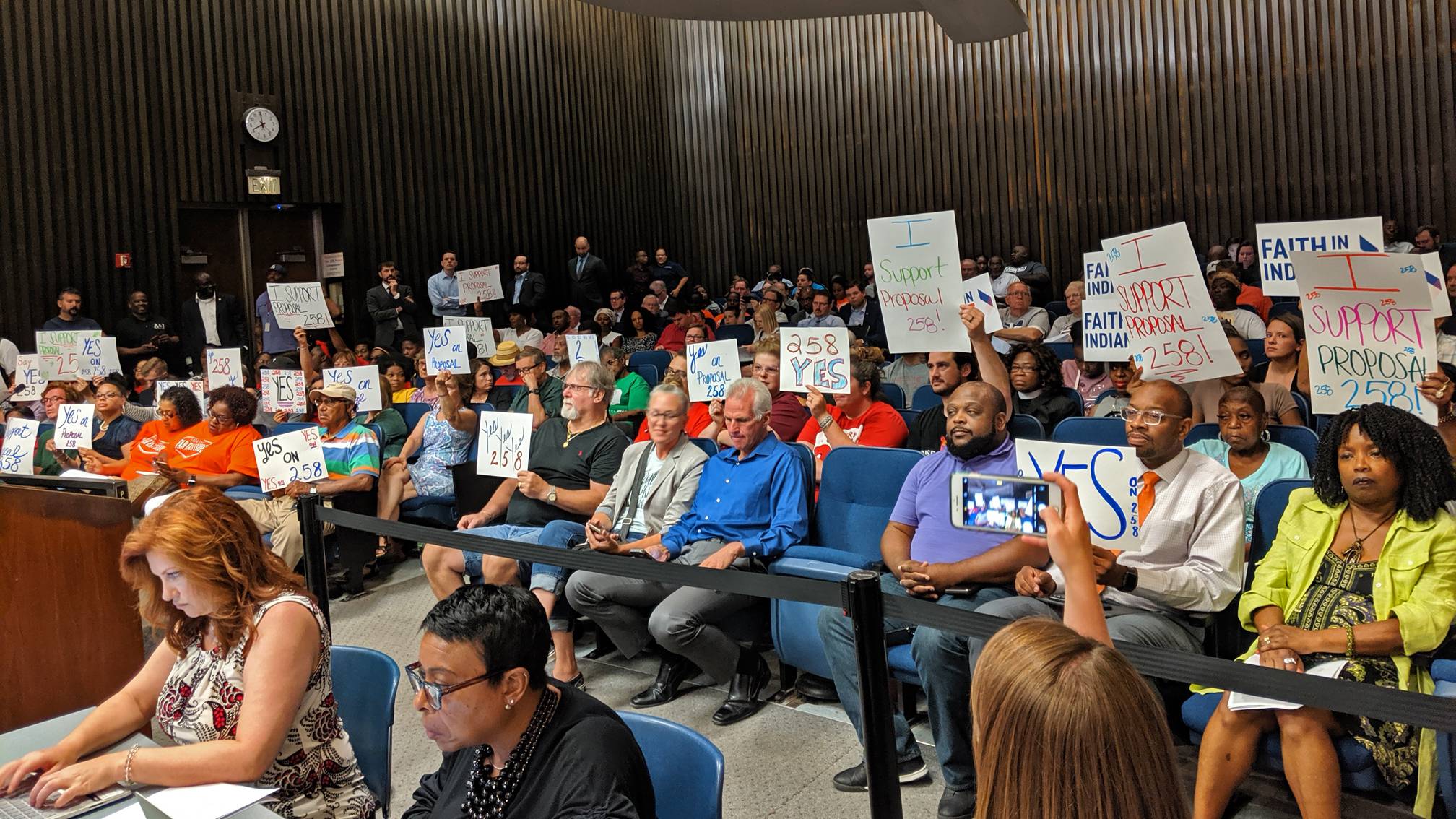 Some audience members held signs supporting the proposal, which allocates $580,000 to food assistance programs in the city. (Drew Daudelin/WFYI)


The Indianapolis City-County Council on Monday night approved $900,000 to fund a group of programs, including some from Mayor Joe Hogsett's administration designed to address food deserts in the city. In a packed room, some supported and some opposed the specifics of the proposal. But many voiced concerns over how the city approached the problem.

Out of the four food-related programs to be funded, many took issue with two. A cell phone app designed to help people find food, especially at food pantries, was criticized for solving a problem that doesn't exist.

But most spoke against a six-month long program that offers subsidized rides with Lyft. If you use the ride-hailing company to go to one of four grocery stores on the far east side, where many of the conversations and concerns about food deserts are happening, the ride will be subsidized.

The program was designed to help people in the area, especially those without reliable transportation or who have physical disabilities, get to a grocery store. But many in the community have spent years watching grocery chains, including Walmart, leave their neighborhoods, and some see the Lyft program as a corporate deal that ignores grassroots solutions in need of support.

Urban farmer Sharrona Moore says the community has to rely on itself for food, and that’s where more of the city’s money should go.

“In our neighborhood the situation is so detrimental right now, to our health, that we can no longer wait for the grocery stores to come back,” Moore says.

Director of Public Health and Safety Paul Babcock says it’s important to offer transportation to those who need it.

“Knowing that there's not a grocery store on every corner, that there's not grocery stores in neighborhoods, and that, you know, seeing the Walmart recently leave, this is a project where we can try and get folks to stores that have healthy food, get them access to it and get them back to their home,” Babcock says.

The other two food-related programs to get funding: one that supports "champion" community members in neighborhoods with food access issues, and another that brings fresh produce to areas that need it with a mobile food market.

The Council approved an amendment to the proposal before it passed, introduced by Councilor La Keisha Jackson from the far east side, to expand the kinds of programs some of its funding can support, a direct response to community feedback that seemed to appease some critics.

Additional funding in the proposal will expand the city's anti-crime Indy Peacemakers program, which employs community advocates to engage with at-risk youth.

Some at the meeting criticized the proposal for including too many short-term solutions to a massive, complicated problem. Babcock and others from the city say they plan to use these initial programs to gather data, which they'll use to further develop a long-term plan. Community members on both sides say they hope the issue sparks an ongoing conversation about more permanent solutions.

Tags:IndianapolisCity-County Councilfood accesshungerfar east sidecrimeIndy Peacemakers
Support independent journalism today. You rely on WFYI to stay informed, and we depend on you to make our work possible. Donate to power our nonprofit reporting today. Give now.