Hoosier Veterans Turn To Yoga To Help Treat PTSDThe Indiana State Department of Health estimates that there are between 10,000 and 50,000 veterans in Indiana who have PTSD.urlPTSD, stress, yoga, Post Traumatic Stress Disorder, Roudebush VA Hospital2016-08-28T00:00:00-04:002016-08-28T00:00:00-04:00
Unable to load the audio player.
You could try direct download?
playpausemuteunmute
Listen on

An estimated 8 million people in the United States suffer from PTSD: post-traumatic stress disorder. In Indiana, as many as 50,000 Hoosier veterans could be dealing with it. But a new program is exploring a novel treatment: yoga.

U.S. Navy veteran Larry Dodd has had multiple surgeries.  He deals with poor circulation; he’s a recovering alcoholic; and he and his wife are raising their two young grandchildren because his son is dealing with addiction. But he’s found something that helps with his stress.

“I really believe it’s changed a big part of me at 62-years-old,” Dodd says.

Yoga. The ancient practice of utilizing mind and body to achieve harmony and wellness.

For instance, medically, Dodd says after a recent ultrasound to check the level of blood flow in one of his legs, the results shocked him.

The opportunity to practice yoga presented itself to Dodd at the Roudebush VA Hospital in Indianapolis. He saw a pamphlet about a research project studying yoga as treatment for PTSD.

Louanne Davis, a clinical research psychologist at the VA, has been focusing her study on psychological interventions for people with chronic mental illnesses like schizophrenia or PTSD – a problem that’s especially prevalent for Indiana veterans.

The Indiana State Department of Health estimates that there are between 10,000 and 50,000 veterans in Indiana who have PTSD.

She says that estimate may even be low.

“Trauma memories and reminders constantly increase arousal and that is because the stimulating branch of the nervous system gets us ready to fight or flee so that we can survive,” Davis says.

That cycle can lead to reoccurring stress and anxiety.

“It’s exhausting mentally and physically and it has a lot of negative effects on the mind and the body and the immune system.” Davis explained.

Numerous studies have sought to verify yoga as an effective intervention for anything from cancer to asthma.  Fewer studies have examined the benefits of how yoga can help a patient’s mental health and Davis’s study is one of the largest to date.

She says she is looking at yoga as a form of treatment because it stimulates the calming branch of the nervous system.

“That kind of helps to put everything back in balance once we’re no longer in danger and it helps to decrease that hyper-arousal.” Davis said.

In a small room on the seventh floor of the VA Hospital, yoga instructor Nancy Schalk leads a handful of participants.

“Really the mind and body cannot be separated, so yoga acknowledges that it is one in the same,” Schalk says.

The classes that she teaches as part of the study have been adapted. She makes sure participants always know what’s coming and terms like surrender are not used. But one element is instrumental: breathing

“With the breath we can go into the part of our nervous system that controls our blood pressure and heart rate and calm ourselves that way,” Schalk says.

The study is funded by a research branch of the Veterans Administration and it is using a comparison group participating in a wellness class to measure the results.  Davis hopes the information can help lead treatment change.

“These results will inform policies down the road in terms of what the VA would offer for veterans and people in general in the community who have PTSD,” Davis said.

For patients like Larry Dodd, whose son is also a veteran struggling with his own illnesses, it’s the hope of helpful solutions – like yoga – that matter.

“Maybe somewhere down the line me and my boy will get together and do some Namaste,” says Dodd.

Davis is still looking for participants for the study that will continue through next year.

Tags:PTSDstressyogaPost Traumatic Stress DisorderRoudebush VA Hospital
At WFYI, our goal is to cover stories that matter to you. Our reporting is rooted in facts. It considers all perspectives and is available to everyone. We don't have paywalls, but we do need support. So if unbiased, trusted journalism is important to you, please join us. Donate now. 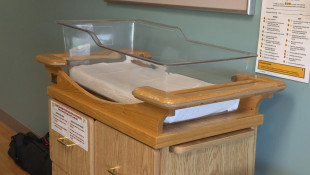 Newly released Indiana Department of Health data from 2018 show the infant mortality rate decreased from 7.3 to 6.8 for every 1,000 births.
Read More