The United Auto Workers and General Motors continue contract negotiations with the union strike against the company. Several issues including wages and temporary workers are being discussed, but for some members the strike is also about keeping their jobs.

Last year GM officials announced the company would be closing some of its plants as it prepares for the future of the automotive industry.

General Motors’ Kokomo facility employs the fewest of the company’s four locations around the state with about 420 workers, according to the company website.

However, Local 292 Shop Chair Greg Wohlford says that number used to be much higher – with thousands of workers employed at one time. He says he’s concerned for the future of the plant with GM closing some facilities and offshoring others.

“We’re just trying to keep our job. We’re trying to fight to keep work here in the United States instead of shipping it overseas,” says Wohlford. “And it is a big concern, because if we don’t get assigned work out of this contract, we’re probably going to go out of business.”

The strike is in its fourth week and is taking a toll on UAW members and their families who are making about $250 a week in strike pay.

Some members tried to prepare financially, but Wohlford says as the strike continues money will become even tighter.

Inside a nearby union hall sits a food bank where members can pick up food they may need. Wohlford says donations to the food bank are just one of the ways the community shows its support for UAW members.

“We’ve had tons and tons of food been brought out; water; different soft drinks,” he says. “We had the local firefighters donate a generator for lights so we can see at night at our sites, so it’s been stuff like that.”

Kokomo is one of four GM facility locations in Indiana with others in Bedford, Marion and the Fort Wayne area.

Tags:United Auto WorkersGeneral Motorsstrikeautomanufacturing
Support independent journalism today. You rely on WFYI to stay informed, and we depend on you to make our work possible. Donate to power our nonprofit reporting today. Give now. 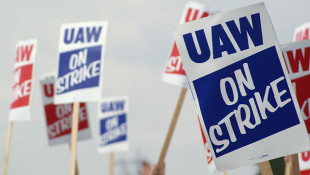 Contract talks hit a big snag over product commitments for U.S. factories, a union official wrote in an email to members.