INDIANAPOLIS -- The Indianapolis City-County Council debated and advanced several measures at its July meeting, but few have any solid legal impact.

The council advanced a move against BlueIndy electric rental cars, mandatory reporting of stolen guns and the first major overhaul of zoning laws in four decades. It also urged banks to do more to take care of abandoned properties stuck in foreclosure purgatory.

Indianapolis city councilor Zach Adamson wants rentable electric cars towed from their downtown site in a show of disapproval for the program. Democrat Adamson introduced the symbolic measure at Monday’s City-County Council meeting and it will reviewed by a committee.

"Is this more important than fixing the roads or sidewalks? Should the city continue to give exclusive use of public right of way to single companies? Roads you and I paid for so we could visit the commercial outlet of our choice," Adamson wrote on his Facebook page.

Businesses near the dozens of charging sites popping up across the city have also expressed concern over their impact.

The BlueIndy cars parked on Washington Street are there illegally because it's a no-parking area and they should be removed, Adamson is contending.

The mayor's office said the tradeoffs are worthwhile.

“A handful of councillors have made it clear that they are taking aim at BlueIndy, which is unfortunate," said spokeswoman Jen Pittman in a statement. "When the BlueIndy system is operational, it will provide a clean, affordable transit option for visitors and residents. Many of our community’s anchor institutions, as well as businesses of all sizes, recognize the potential of a citywide all-electric car sharing service, and they have joined us in welcoming BlueIndy.”

The council wants banks to do more to maintain abandoned homes that are in the foreclosure process, but there’s nothing they can really do about it.

"The banks are responsible for the maintenance within the purview of state law and state law says we can’t add any obligations on those banks, so we will not be able to enforce this," said councilor Jeff Miller.

Miller, a southwest side Republican, introduced a law at Monday’s meeting saying the council wants banks to mow lawns and do upkeep on so-called “zombie homes” that are stuck in foreclosure limbo, even if state law supercedes the ordinance.

The resolution passed with about two-thirds of the council’s support.

"Your first trip to China starts with one step," said councilor Bob Lutz, who voted yes.

Indianapolis and many other cities were overwhelmed by zombie homes during the housing crisis and recession. People who could no longer afford to pay their mortgage walked away from homes. Many fell into disrepair during the long foreclosure process.

Support for a retail workers bill of rights did not win immediate support of the council.

A handful of Democratic councilors were ready to throw the council’s ceremonial support behind retail workers’ efforts to secure better hours and benefits, but instead Republican Aaron Freeman moved to have the issue sent to a committee.

"These kinds of proposals that contemplate other things and have ‘asks’ in them, should go to committee," Freeman said.

With enough support to send it to committee, the council will hear formal testimony from retail workers and labor activists. Some councilors made the point this is a benefit, that activists’ voices will be more fully heard.

The bill of rights was created by Central Indiana Jobs with Justice. Executive Director Mary Kate Dugan says support from the council would be a step toward creating good jobs.

"Retails workers get their schedules sometimes at the last minute," she said in an interview. "And if you’re part time, usually you need to have another job too. So it makes it extremely difficult to work the two jobs you need."

The resolution supporting the group’s ideals will be debated at the economic development committee’s hearing later this month.

Tags:City-County CouncilIndianapolisBlueIndyretail workers bill of rightszombie homes
Support independent journalism today. You rely on WFYI to stay informed, and we depend on you to make our work possible. Donate to power our nonprofit reporting today. Give now. 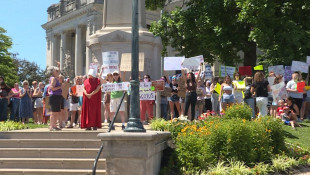 Bloomington protestors are calling on government officials to demand abortion as a right. The crowd met Monday at the county courthouse and marched to Planned Parenthood and a pregnancy crisis center.