INDIANAPOLIS -- Police officers shot and killed a man armed with a knife who they say refused to drop it and lunged at an officer Saturday afternoon.

It's the second fatal police-action shooting by Indianapolis police in less than a week. Both victims were armed, according to police. No officers were injured.

In the Saturday incident, Indianapolis Metropolitan Police Department officers responded to a call of a suicidal man with a knife on the 7900 block of Red Mill Drive shortly before 11:30 a.m., according to a statement from IMPD.

The altercation was captured on cellphone video by an onlooker, which shows a man wearing only red boxer shorts and bleeding, standing in the middle of the street, surrounded by at least four officers.

Police say the man refused to the drop the knife despite multiple orders from responding officers. They then tasered the man at least twice, who police identified as 25-year-old Christopher Goodlow, though "the taser appeared to have no effect on him," the IMPD statement said.

An officer also attempted to tackle Goodlow to the ground, but the department says the officer was unable to secure the knife-wielding hand.

In the civilian video, Goodlow can be seen running toward officers and pointing the knife at them multiple times. He lunges toward an officer after several minutes, at which point two officers shoot Goodlow. Three gunshots can be heard.

Emergency medical services arrived a moment later and he was pronounced dead on the scene, according to IMPD.

The two officers that fired their weapons were on placed administrative leave, which is standard procedure. They are 14 and 11-year veterans of IMPD, the department said.

According to the city's online database and recent news releases, this is the 20th officer-involved shooting by IMPD in 2015.

On Dec. 10, IMPD officers shot and killed Jason Bryant, 34, after police say he pointed a handgun at two officers inside a home.

Bryant is accused of fleeing a traffic stop around 2 a.m. and running into a home on the 2100 block of Conrad Ave. Police say they obtained a search warrant to enter the house around 5:30 a.m., at which point Bryant wielded the gun and was shot. He died at the hospital. He was out of jail on bond for drug and weapons charges.

Both shootings remain under investigation by IMPD.

In the 20 officer-involved shootings this year, the victim was armed in all but three cases, usually with a handgun, according to the database. An officer was wounded by gundfire in two of the incidents. None have been ruled unjustifed so far.

Tags:Indianapolis Metropolitan Police Departmentpolice shooting
Support independent journalism today. You rely on WFYI to stay informed, and we depend on you to make our work possible. Donate to power our nonprofit reporting today. Give now. 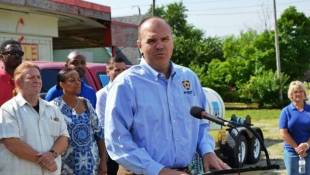 Indianapolis' new police chief says the past six months have been "extremely violent" as he prepares to put on the IMPD badge.