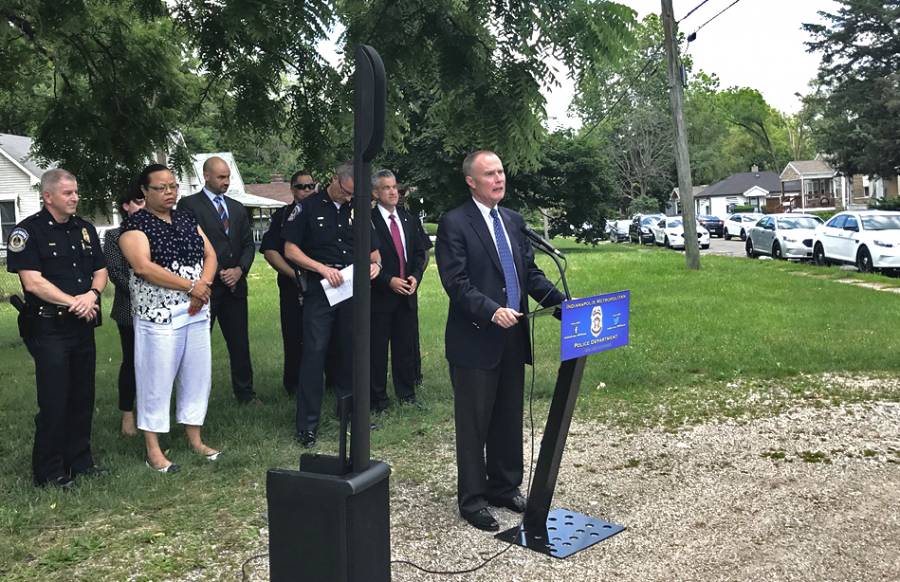 Indianapolis Mayor Joe Hogsett gave an update on the police department’s shift to beat policing – a model that gives officers less ground to cover, which could allow them to build relationships with the community. (Photo by Drew Daudelin/WFYI)

Indianapolis Mayor Joe Hogsett detailed new efforts to reduce and prevent violent crime in the city by addressing the root causes of crime.

The announcement comes six months after Hogsett said he would work with IMPD to address the growing problem, and as the city is on pace to have a record number of homicides.

Mayor Hogsett gave an update on the police department’s shift to beat policing – a model that gives officers less ground to cover, which could allow them to build relationships with the community.

He says IMPD officers with a beat will receive daily briefings with fresh, data-driven information on criminal activity in their area.

"IMPD is being more nimble, more responsive, more effective than they’ve ever been before," Hogsett says. "And we firmly believe that this change in approach will have a significant difference."

IMPD Chief Bryan Roach says a focus on data will allow othe department to tackle problems around the city in a more targeted, efficient way.

"When we pair crime data with the neighborhood-level knowledge of a beat officer, the intelligence that results allow us to police more effectively and devote more time to developing relationships with the youth in our community who are most at risk,” Roach says.

"We’re not very good at the community part," Roach says. "But we’re getting there."

He says the department needs to focus more on illegal drug activity, because a significant portion of the city's violent crime occurs during those transactions.

City officials also announced a new program called Project Safe Neighborhoods. The city calls it a "juvenile re-entry program," and it's designed to keep young people from falling into a cycle of crime.

The federally-backed program attempts to do this by helping young people get an education, and become job-ready, by connecting them with coaches and mentors.

These new crime prevention efforts come from a partnership between Mayor Hogsett's administration, IMPD, and the Office of Public Health and Safety.

Minkler says their goal is to reduce the number of shootings and violent crime in Indianapolis, not to arrest as many people as they can. But he says enforcement is still a critical piece of crime prevention.

Tags:crime preventionIMPDviolent crimeJoe Hogsett
Support independent journalism today. You rely on WFYI to stay informed, and we depend on you to make our work possible. Donate to power our nonprofit reporting today. Give now.