The Indianapolis Public Library is launching an initiative against violence.

Stand4Peace encourages the community to engage in conversations that address how to combat, particularly, black on black crime. The centerpiece of the project is a new art exhibit that opened, Tuesday. WFYI’s Sam Klemet was at the ribbon cutting and has this report.

Derren Chapman is looking at a young man on a swing wearing a sweatshirt with the letters CSU on the front, symbolic of future college aspirations.  But, the boy will never be able to realize that dream because he was caught in the crossfire of a drive-by shooting.

"It's something that I've seen my whole life growing up, people killing people, friends killing friends," said Chapman.  "This just gives it a whole different perspective."

Chapman is looking at one of the pieces of a new art exhibit at the Indianapolis Public Library. It’s called "Kin Killin Kin" and it depicts violence similar to what taking place now throughout his hometown.

Chapman is particularly moved by an image of black men shooting at each other while wearing white sheets over their heads, like members of the Ku Klux Klan.

"I've always thought about like how black men are killing black men, but I guess looking at this is just like 'wow, we really are killing each other more than even the Klan," he said.  "It's powerful."

Chapman grew up just a short drive away from the library, at 29th and Martin Luther King Jr. streets.

The youngest of seven, he’s seen some of his older siblings sucked into the street life, but decided he wanted a different path.  After graduating from Indiana University, Chapman started his own business making youth football jerseys.

He also mentors Indianapolis youth and says the "Kin Killin Kin" exhibit sends an important message that material possessions and committing crimes to have them is not how to live a fulfilling life.

"I tell the kids today, 10 years from today it won't matter what shoes you wore today or what necklace you had on.  The only thing that is really going to matter is what you learn today and how you use it," said Chapman.  "This is certainly powerful.  This is some of the most powerful stuff I've ever seen as far as that the community will definitely connect to, so, I love it.

During the exhibit’s opening, members of the African American History Committee honored victims of violence in Indianapolis by reading their names out loud and ringing a bell.

The Central Library is hosting the exhibit as part of its Stand4Peace initiative aimed at exploring why violence is happening in Indianapolis and what the city can do.

"We all need to answer that question," said Library CEO Jackie Nytes.  "Maybe this exhibit will probe us and push us to ask that question with even more passion.  I hope so, because it needs to be asked.”

The 13 charcoal images are done by artist James Pate of Dayton, Ohio.  Exhibit curator Bing Davis says Pate wants the work to provide understanding of the causes of violence and the solutions.

"I think about what the artist said when we were first putting (the exhibit) together.  He said, '10 years of work, if I can just save one brother, these 10 years of drawing will not be in vain,'" said Davis.

Derren Chapman is impressed by the work, but says the only way Indianapolis is going to curb violence is if the people who visit the exhibit use the images as inspiration to go out and take a hands-on approach to solving the problem.

"You have to go straight to the ghetto.  Get right with them and walk on the street corner.  You know they are selling dope.  It's simple, you see them on the corner, they are probably on drugs.  Go talk to them. Engage with them.  They are not that tough.  That's why they use guns," said Chapman.  "It's just getting through, getting through to them, however you can connect to them."

Artist James Pate will be at the exhibit for the International Day of Peace on Sept. 20. His works are on display through Sept. 28. 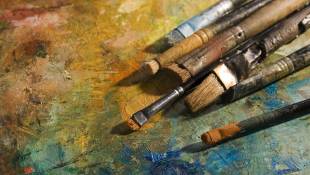 In the Art of the Matter archives, you can explore what "art" meant within the Central Indiana’s vibrant cultural scene through 2018. Hear from an array of fascinating guests who examine the cultural community from the perspective of who, what,... 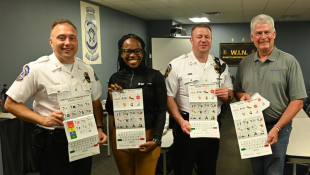