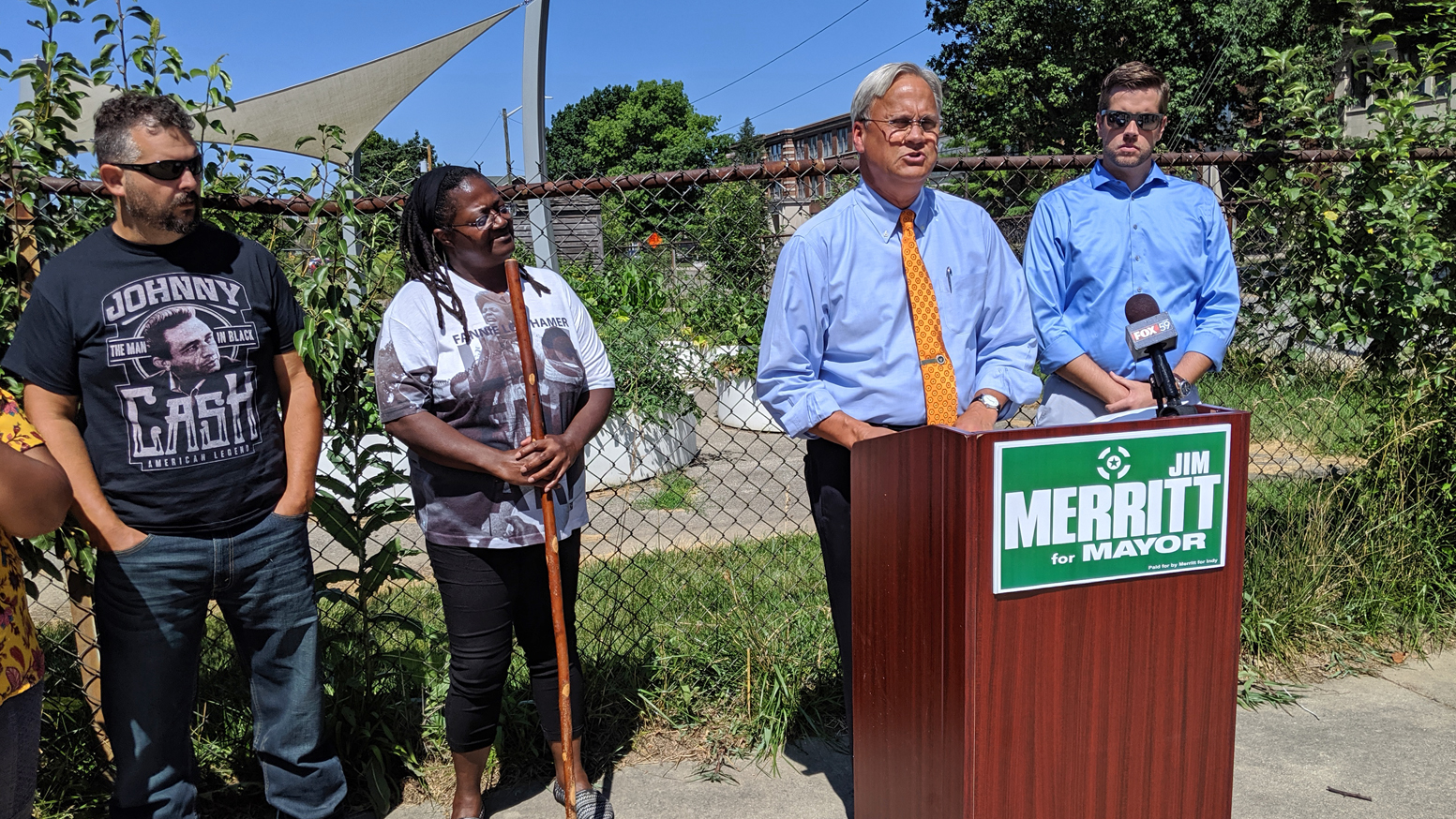 Jim Merritt says a proposal from the mayor to address food insecurity, particularly a program that funds a smartphone app that helps users find nearby food, is a "waste of money." (Drew Daudelin/WFYI)


The City-County Council will vote soon on a proposal, introduced by Mayor Joe Hogsett, to use $900,000 to fund a number of local efforts, including four programs meant to address food deserts in some parts of the city.

Jim Merritt, the Republican running for Indianapolis mayor, criticized Hogsett's proposal at a Thursday press conference. Merritt says the programs, particularly one that funds a smartphone app that helps users find nearby food, are a “waste of money.” He says getting to food is the problem, not finding it.

"I'd much rather take those monies and use them for some good programs, to teach kids how to farm, to bring food to the areas with incentives for food bodegas, and other ways," Merritt says.

Hogsett's plan includes a partnership with the ride-sharing company Lyft, which would create subsidized rides to specific grocery stores. Merritt says the program would make it more difficult for bodegas and other community food sources to survive.

"This is more of a corporate subsidy than community support,” Merritt says. "Moreover, this thoughtless spending is not sustainable and will not get to the root cause of the problem, which is bringing food to the people – not the people to the food."

Merritt says the city should work to provide tax incentives or subsidies to local food markets in areas with food insecurity.

Hogsett’s campaign says the mayor’s proposal was created based on community feedback – and that food access efforts from his administration focus on many of the same things Merritt is advocating for.

"The Mayor's work has included technical assistance and grant-writing services for A&I Variety Meats and Produce, and Sen. Merritt’s own food proposal calls Cleo’s Bodega – the first recipient of Mayor Hogsett's Healthy Food Access Grant – a model that should be established city-wide," Heather Sager, spokesperson for Hogsett's campaign, said in a statement.

The City-County Council will vote on the mayor's proposal at its full meeting this Monday.

Tags:electionfood accessIndianapolisJim MerrittmayorJoe Hogsett
Support independent journalism today. You rely on WFYI to stay informed, and we depend on you to make our work possible. Donate to power our nonprofit reporting today. Give now.

What do I need on Election Day? The midterm election is Nov. 8

What do you need on Election Day? Where can you find your ballot to research candidates ahead of time? Does your vote really matter?
Read More