Jason Seaman, a seventh grade teacher at Noblesville West Middle School, was shot three times when an unidentified student fired several shots in his classroom. He is credited with tackling and disarming the shooter.

“I want to make it clear that my actions on that day, in my mind, were the only acceptable actions I could have done given the circumstances,” Seaman says. "I deeply care for my students and their well being."

Seaman thanked the first responders – another West Middle School teacher and a police officer – for helping keep Ella Whistler, 13, alert while waiting for help to arrive.

"I can't say enough how proud of Ella I am and how we all should be," Seaman says. "Her courage and strength at such a young age is nothing short of remarkable and we should all continue to keep her in our minds as she continues to recover."

Whistler's family released a statement late Friday evening and said she is in critical but stable condition at Riley Hospital for Children in Indianapolis.

"I'm still processing much of what has happened but I can say with absolute certainty that I am proud to be a [Noblesville] Miller," Seaman says.

Seaman's actions were praised by President Donald Trump, and many others.

Thanks to very brave Teacher & Hero Jason Seaman of Noblesville, Indiana, for his heroic act in saving so many precious young lives. His quick and automatic action is being talked about all over the world!

"To know that Jason put others before himself is not a surprise – I’ve found out – to anyone that knows him, I’m so proud that Jason is a Hoosier," Holcomb says. 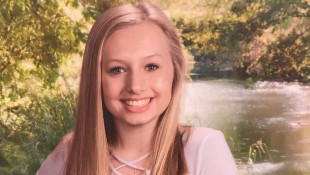 The Noblesville school district's superintendent says the 13-year-old is making progress in her recovery while hospitalized in Indianapolis.