Okara Imani Taps Into The Healing Power Of Music

Most Small Studio performers arrive with at least one bandmate or instrument in tow, but vocalist Okara Imani showed up with nothing but her voice. The singer-songwriter says her diverse performance history has conditioned her to standing in front of a room full of strangers with nothing but her songs.

"Every time I do any of these things in front of the people who are most important, which is the listeners, I'm nervous,” Imani said. “But I am used to it, be it from audition culture, or open mic culture - you just have to stand up and do it. So I am used to that bare feeling, it’s comfortable."

Imani began her performance for Small Studio Sessions with an a cappella offering. “I come in peace,” Imani intoned in a warm and welcoming voice. She says the piece was created to initiate an immediate connection with audiences.

"That piece is very important. It sets the moment of sharing and gets everyone's vibrations synced up," she says. "It gets the audience’s attention and they have to stop and listen because there's nothing else happening."

Embracing a broad range of stylistic textures, Imani’s performance volleyed nimbly between genres. She credits her training in classical music for giving her the foundation to take on a wide breadth of musical styles.

"I wanted to get the building blocks and tools to be able to sing anything," Imani says. "I wanted to hear new instruments. I wanted to learn the social context of different culture's music from an anthropological view point. I got all that from my classical training."

Emotional expression plays a large role in Imani’s songwriting. In fact, Imani has described her style as “emo,” referring to a heavy genre of post-punk rock that gained popularity in the early 2000s.

Imani provided some context for that classification, "I say emo because it's emotional. That whole genre of emo is driven by feelings, and not being afraid to express those feelings no matter how abstract, or not being afraid of the imagery used to express those feelings. So that's why I say emo, because I'm very squishy. When I'm writing everything comes from a personal experience. It's very emotion driven."

While Imani has become a familiar presence on the Indianapolis music scene, she’s still in the early stages of building her career. Imani said she’s not sure where her music will go, but she emphasized that building a relationship with her audience is key.

Tags:Okara ImaniSmall Studio Sessions
Support independent journalism today. You rely on WFYI to stay informed, and we depend on you to make our work possible. Donate to power our nonprofit reporting today. Give now. 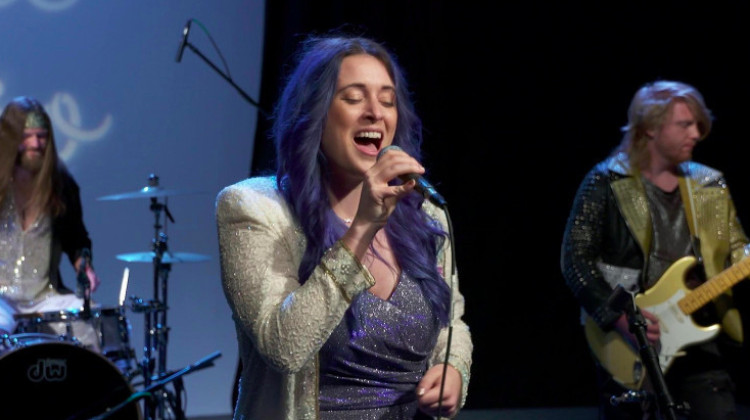