“I'm so proud to team up with Lilly and Komen, because the whole point of their partnership is to bring more resources that are tailored for Black women impacted with breast cancer,” said Chaunté Lowe, a breast cancer survivor and a spokesperson for the partnership.

Breast cancer is one area where health disparities are glaring.

These statistics are well known to Lowe.

She is a mother of three young children, a three-time world champion high jumper, an American record holder and an Olympic medalist. When she was at the top of her career as a professional high jumper, she was ready to retire from competitive sports to move on to the next chapter in her life. But then she was diagnosed with an aggressive form of breast cancer that disproportionately affects Black women.

“I was terrified,” she said. “I immediately thought about my children. And I looked into their faces and [was] thinking about all of the things that I didn't teach them yet, you know, they're still very young. And I still had a lot of parenting that I believed that I needed to do. And I felt like when I got that diagnosis, that that was immediately cut short.”

Lowe detected her cancer at an early stage which made favorable treatment outcomes possible. But that’s not the case for many Black women. A study that looked at 91 African American women between the ages of 40 and 84 found that 55 percent of them did not perform monthly self examinations and nearly a quarter did not know how to perform a self examination and nearly the same number never had a mammogram.

“I had started doing regular breast exams after I heard about a friend of mine in 2016 who was diagnosed with stage zero breast cancer. And she explained to me that getting her early diagnosis is what helped her ultimately be able to treat it,” Lowe said.

“I found a lump in 2018. It was initially dismissed, and then I knew something wasn't right.”

Lowe said she doesn't want to believe that being an African American woman was the reason her health issues were dismissed by her doctors, but she does not rule it out.

After that first dismissal, she waited 11 months and continued to examine her lump. In the summer of 2019, she went back to the doctor’s office only to be told she did indeed have breast cancer.

Black women are less likely to develop breast cancer compared to White women. But when they do, they are more likely to die from it. The reasons behind the worse health outcomes span genetics, social and economic barriers, and medical racism.

Lowe did not have a history of breast cancer in her family; she is fit and takes great care of her body. She did not fit the “profile,” but breast cancer hit anyway.

She had a double mastectomy and had to go through chemotherapy. She was eventually declared cancer free.

Still, with all her celebrity and proven track record of overcoming challenges, she says the diagnosis made her feel like she was pushed into a subway tunnel all alone. She turned to social media to try to find a community that would provide support and that’s when she found Komen.

“I just felt like I was immediately part of a community,” she said.

Lowe said the culturally competent resources made available to her through Komen made a big difference in her awareness and outlook and helped her navigate her treatment. She is also well aware that not every Black woman has the same level of access to health care that she had.

One of the goals of the Lilly-Komen partnership is to expand the “patient navigators” program — where oncology social workers provide emotional support and information to help Black women overcome barriers to quality care. The service is available through a hotline that Black women can call to connect to experts.

The partnership will also result in virtual training for new and current social workers who can provide support tailored to Black women facing breast cancer.

But the backdrop to all these disparities is one important fact: Black women are strikingly underrepresented in clinical trials for breast cancer treatments, which means that the interventions widely available may not be the best fit for Black women. And that could lead to worse outcomes.

After Lowe’s treatment journey, she wants Black women to take the time to empower themselves with adequate information about breast cancer and the importance of early detection.

She said if her journey with breast cancer did anything, it strengthened her will and desire to go back to competing to prove that Black women can do anything they set their minds to. Throughout her breast cancer journey, she trained for the Tokyo Olympics and was as ready as ever. But then she got COVID-19 and couldn’t join.

But cancer didn’t stop her and surely missing out on Tokyo wouldn’t either.

“So, this year, we have the outdoor track and field World Championships that are going to be in Eugene, Oregon. So I'm super excited about that,” she said. “My overarching goal [is] to get the message of breast cancer awareness out. And that's what ultimately caused me to push myself out of retirement and go forward and keep trying to compete.”

Women are recommended to do a monthly breast self exam regardless of their family history or risk factors. For more information, here is a video and picture guide to breast self exam by the National Breast Cancer Foundation.

This story was reported as part of a partnership between WFYI, Side Effects Public Media and the Indianapolis Recorder. Contact reporter Farah Yousry at fyousry@wfyi.org. Follow on Twitter: @Farah_Yousrym.

Tags:Eli Lilly and Co.Susan G. Komenbreast cancerhealth inequitycancer
Support independent journalism today. You rely on WFYI to stay informed, and we depend on you to make our work possible. Donate to power our nonprofit reporting today. Give now. 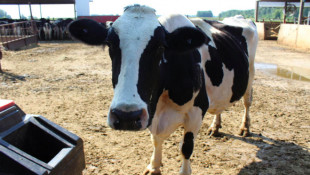 Residents of Lake Village and environmental groups have won a lawsuit against the Army Corps of Engineers over a large organic dairy in Newton County. A federal court ruled that the agency didn’t do a good job of investigating Natural Prairie Dairy for a wetland permit.

The Indiana Bureau of Motor Vehicles is temporarily closing eight offices around the state starting Oct. 4, and lasting through the end of the month. It's due to an ongoing staffing shortage at local branches. 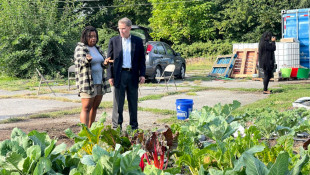 Mayor Joe Hogsett joined members of the Office of Public Health and Safety Board Thursday morning to show support for Soul Food Project, a nonprofit designed to fight food insecurity.