The Indy Parks and Recreation Board wants more time to consider a proposal that would allow people to ride bikes on greenways at all hours.

Currently, riders can bike on trails from 5 a.m. to 9 p.m. The proposal calls for expanding access to 24 hours.

But, Parks Board member Joseph Wynns says before the city makes any changes, it has to better evaluate the potential safety ramifications.

Kevin Whited with IndyCog understands those issues, but doesn’t think the greenways pose any more of a threat than city streets which are open for riding at all times.

"There are obviously safety concerns.  We would be less than honest if we were not concerned about that," he said.  "But, we feel, and I think that can probably be statistically proven, that it's much more dangerous to ride on the roads than to ride on the Monon and maybe get mugged, maybe get assaulted."

He thinks as the city’s biking culture grows, so too should the hours when riding is allowed.

Whited says expanding greenway access to 24 hours will raise the city’s standing with the League of American Bicyclists.

The parks board is expected to take another look at the proposal next month. 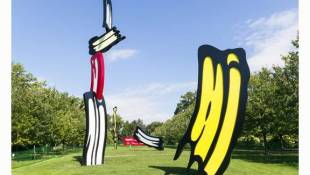 A Block Party is planned for the official unveiling of the new, huge, colorful Lichtenstein sculpture.