INDIANAPOLIS (AP) — A new bridge spanning the Ohio River between Indiana and Kentucky has been named after the 19th Century explorers Meriwether Lewis and William Clark.

The new Lewis and Clark Bridge, which was previously known as the East End Crossing, opened to traffic Sunday. It is one of multiple bridges connecting southern Indiana with the Louisville Kentucky metro-area.

The $763 million bridge took more than three years to build. It offers a bypass route for travelers who want to avoid downtown Louisville traffic.

Tags:Ohio Rivereast end bridgeLouisvilleLewis and ClarkMeriwether LewisWilliam Clark
Support independent journalism today. You rely on WFYI to stay informed, and we depend on you to make our work possible. Donate to power our nonprofit reporting today. Give now. 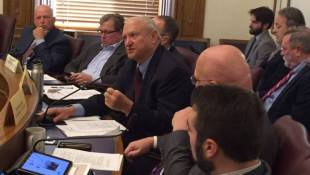