IndyGo’s Red Line created new traffic patterns on Indianapolis streets, stretching from Broad Ripple on Indy’s north side to the University of Indianapolis on the south side.

With new bus stops in the middle of the street, brightly painted sections of pavement, restrictions on left turns, and buses driving northbound on streets that are one-way south, there's a lot of new information for drivers to absorb.

We collected a group of animated videos produced by IndyGo to help you understand the new traffic patterns, and we placed them on a map to help you visualize where you will encounter them.

As the Red Line moves along College Avenue, northbound and southbound buses will share the center bus only lane and bypass at stations set in the middle of the street.

Left turns are restricted to marked intersections with new traffic signals. A low median divides the street, and driving across it is a traffic violation. If you need to make a left turn and the median sits between you and your street, you will need to drive past and make a U-turn.

Capitol Avenue now has a northbound bus-only lane (painted red), but it’s still one way south for the rest of us. The southbound bus lane – indicated by red dashes – will also serve as the left turn lane for vehicles.

Drivers making left turns to and from Capitol will now need to watch for pedestrians on the sidewalk and the northbound buses.

The center two lanes of Meridian Street aren’t painted red, but they are for buses only.
Just like College Avenue, left turns are restricted to marked intersections. A low median divides the street here, too. If you need to make a left turn and the median sits between you and your street, you will need to drive past and make a U-turn. 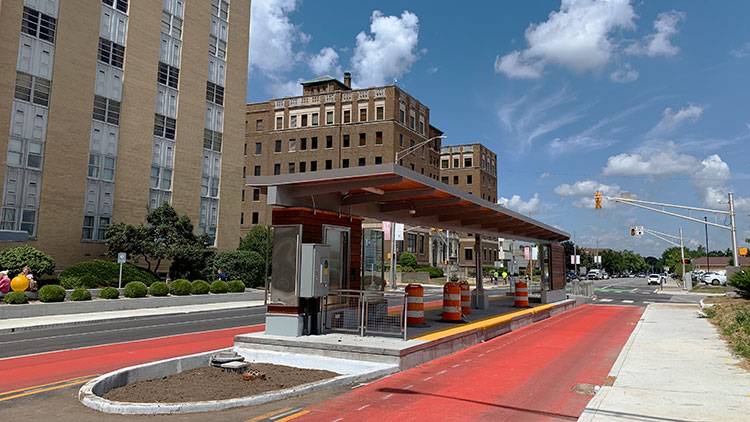 The Red Line station at the intersection of 18th Street and Capitol Avenue. (Doug Jaggers/WFYI)

Traffic is now two-way on 18th Street between Illinois Street and Capitol Avenue. There’s a new dedicated left turn lane for vehicles making a left on to 18th Street. Drivers continuing south on Capitol should stay in the right two lanes. 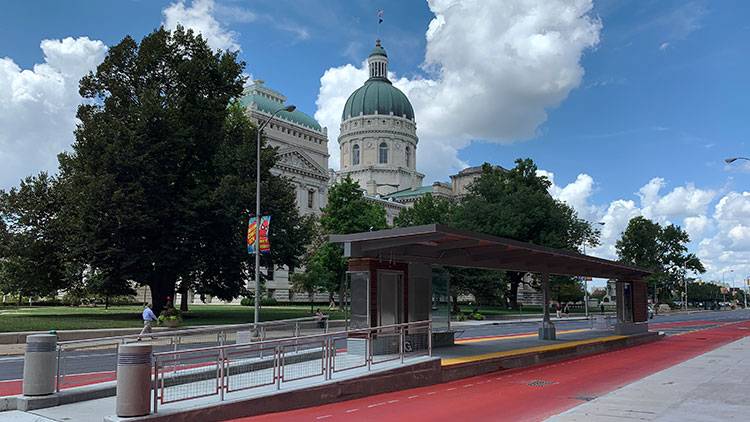 Capitol Avenue is one-way south, but Red Line buses will travel north and south along the street. (Doug Jaggers/WFYI)

This section of the Red Line -- in front of the Indiana Statehouse -- gets a little tricky for drivers needing to turn left to get to a parking garage. The road is one-way south, but Red Line buses will be heading northbound in their red bus only lane (painted red).

Drivers turning left to access the garage will need to look out for the northbound buses and pedestrians. And they need look both ways for cars and buses when leaving the garage. 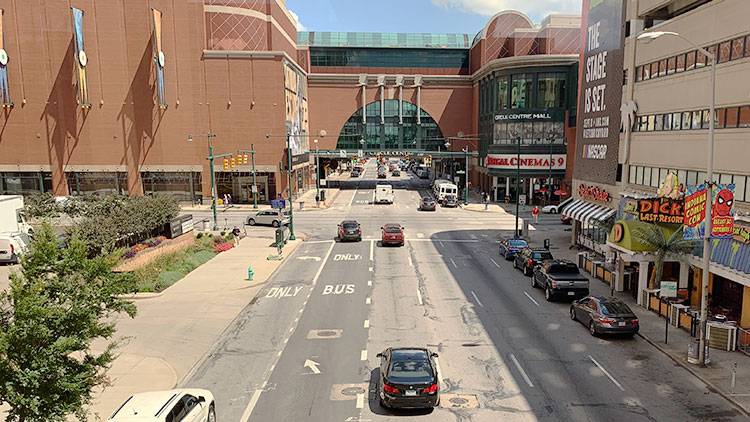 The Red Line at the intersection of Maryland and Meridian streets. (Doug Jaggers/WFYI)

The bus lane on Maryland Street isn’t painted red. You will be able to park along the curb in this section of the Red Line, just merge through the bus lane to your spot. The bus lane will also serve as a left turn lane at Meridian Street.

Tags:Indianapolispublic transportationRed LineIndyGo
Support independent journalism today. You rely on WFYI to stay informed, and we depend on you to make our work possible. Donate to power our nonprofit reporting today. Give now.