What Trevor's Law May - Or May Not - Do For Franklin

Parents of kids with rare cancers in Franklin hope a recently funded law will help them determine the cause. Trevor’s Law aims to update the federal guidelines for investigating cancer clusters. But it is unclear if the law will do what the parents hope it will.

At a forum with the Indiana State Department of Health in August 2018, Stacie Davidson prodded health officials.

“How is it not a cancer cluster?" Davidson says, "If you can’t give me a number that is, how can you give me one that’s not?”

Davidson is co-founder of the group If It Was Your Child. She and other parents didn’t believe the state Health Department when it said it found no evidence of a cancer cluster in Franklin.

More than 20 children in Franklin have been diagnosed with blood and brain cancers, but they’re not all the same specific type — which is what health officials usually look for when designating a cluster.

That’s where Trevor’s Law comes in.

The law directs the federal government to develop criteria for designating cancer clusters and update its guidelines for investigating them.

“Under Trevor’s Law we would absolutely have a cancer cluster in Franklin, if you guys would utilize it," Davidson said at the forum.

Before he left office, former U.S. Sen. Joe Donnelly (D-Ind.) tried to implement the law and asked the U.S. Department of Health and Human Services what he had to do to make that happen.

Donnelly helped pass a $1 million provision to fund the law. Now, the government could choose to use it in any number of ways.

But will any of those help find the clause of cancers in Franklin? Jeff Engel is the executive director of the Council of State and Territorial Epidemiologists.

He says all cancer clusters are real – but some of them are random. Engel explains something called the fallacy of the Texas sharp-shooter, where a cowboy randomly fires bullets into the side of a barn.

“And so then he goes up and draws a circle around where most of the holes are and says, 'See what a sharp shooter I am?'" Engel says.

He says it’s hard for health experts to determine whether a cluster is random or meaningful. Even two people living in the same house could have very different exposures to toxins during the course of their day.

So while Trevor’s Law could change the definition of a meaningful cluster, Engel says that is no guarantee that it will make it easier to assign a cause. He says it could improve the way health officials track cancers and better communicate with residents.

“You’re entering a community that’s already upset, often angry and the worst thing to do is to come in and think you that you know more than they do and appear to be dismissive,” Engel says.

Though the state departments of health and environmental management say they’ve responded to residents’ concerns, Kari Rhineheart says she and other parents have been dismissed almost every step of the way — by state, local, and even federal officials.

Rhineheart, who lost her daughter to cancer, wonders what officials think she’s getting out of this fight.

“What do I win from this? Like what do I gain? I will never win this battle," says Rhineheart. "Even if they clean up every drop of TCE and another child is never exposed — for me and my life and my child, that will never be a win.”

The U.S. Department of Health and Human Services and the Centers for Disease Control declined to be interviewed for this story.

Tags:If It Was Your ChildFranklinJohnson CountyTrevor's LawIndiana Department of Environmental ManagementEnvironmental Protection Agency
Support independent journalism today. You rely on WFYI to stay informed, and we depend on you to make our work possible. Donate to power our nonprofit reporting today. Give now. 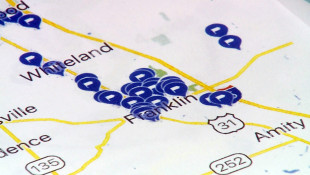 In the past decade, as many as 24 children in the small city of Franklin were diagnosed with rare cancers. Their parents want the federal government to declare a cancer cluster and investigate. But defining a cancer cluster - so it can be investigated - is complicated.