In the past decade, as many as 24 children in the small city of Franklin were diagnosed with rare cancers. Their parents want the federal government to declare a cancer cluster and investigate. But defining a cancer cluster — so it can be investigated — is complicated.

“Emma had a better chance of getting eaten by a shark and hit by lightning at the exact same time than having that tumor, that’s how rare it is,” she says.

Rhineheart heard about other children with rare cancers, including Stacie Davidson’s step son. Zane, was diagnosed with a cancer that affected his blood and bone marrow. Davidson calls him one of the lucky ones — he’s in remission.

“He has fears because of it. I mean every time we get a phone call of another diagnosis or one of our kids has relapsed, you can tell it bothers him and you can tell he wonders if it’s going to be him next,” she says.

The parents contacted the press. They soon learned there is hazardous waste site near where they lived — about five minutes from downtown Franklin. The old Amphenol industrial site is contaminated with industrial chemicals used to degrease metal — TCE and PCE. The Environmental Protection Agency says both of these may cause cancer.

A few years ago, both Rhineheart and Davidson moved to towns just outside Franklin. Though it would have been easier to forget about the city, Rhineheart says they had to keep fighting.

“How do you just walk away from it? Who’s going to continue this if we don’t?” she says.

Three years ago, the parents asked the Indiana State Department of Health to investigate. They want to prove there’s pollution in Franklin and require the Amphenol company to clean it up. But the state said there was no cancer cluster.

“But they won’t tell us what would make a cluster and we’ve asked that for three years, that very simple question, and we will not get an answer,” says Davidson.

The legal definition of cancer cluster is broad. The National Cancer Institute defines it as more cancer cases than expected in a specific area among a certain group of people over a certain period of time.

But it isn’t as easy as saying 24 kids with rare cancers in a city of 25,000 is a cluster. Sara Jo Grethlein is the medical director for cancer services at Indiana University Health.

"We’d like to think of a simple solution, that one exposure maps to one cancer," she says. "We know that all smokers don’t get cancer and not all people that get lung cancer are smokers, so there has to be more than just the environmental or toxic exposure."

Grethlein says childhood cancers can sometimes be more clearly linked to environmental factors. After all, they aren’t old enough to have bad health habits or work with dangerous chemicals.

And there are cancer-causing chemicals in Franklin. The city decided the state’s testing was taking too long. It hired a company which found TCE and PCE at levels from three to 250 times higher than what’s considered safe.

But Grethlein says they will need more data to link this directly to the cancers — including clinical trials.

"There is a difference between fact and suspicion and to get from suspicion to fact, you need research, you need data," she says.

But then it becomes a chicken or the egg problem. Rhineheart, Davidson and other parents can’t get that data without a state investigation.

After the state said it wasn’t a cancer cluster, their activist group, If It Was Your Child, looked to the federal government for help. Former U.S. Sen. Joe Donnelly (D-Ind.) made numerous attempts to evoke Trevor’s Law — a 2016 law that directs the government to develop new criteria for designating cancer clusters and guidelines for investigating them.

"What Trevor’s Law will help us do is to do further review, further investigation, further testing — or it should — and I wanted to make sure this week we were able to make sure that the funding will be in place for the families" Donnelly says.

But there’s another hurdle — in order for communities like Franklin to get the most out of Trevor’s Law, the government has to update the federal guidelines for cancer clusters — and they have yet to do that.

So, will Trevor’s Law help Franklin? We talk about that more in the second part of our series.

Tags:FranklinJohnson CountyIndiana Department of Environmental ManagementEnvironmental Protection Agency
Support independent journalism today. You rely on WFYI to stay informed, and we depend on you to make our work possible. Donate to power our nonprofit reporting today. Give now. 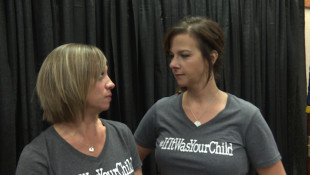 What Trevor's Law May - Or May Not - Do For Franklin

Trevor's Law aims to update the federal guidelines for investigating cancer clusters. But it is unclear if the law will do what the parents hope it will.