Activists Protest After Board Clears Officers Who Killed Aaron Bailey

Faith In Indiana, Black Lives Matter and other activists groups gathered at Monument Circle in Indianapolis after a decision not to fire the Indianapolis Metropolitan Police Department officers who shot and killed Aaron Bailey.

“What we hope is, this is just the beginning. And that Indianapolis begins to really see itself as a unified group that stands against this,” Barnes says.

Aaron Baliey was a member of Christ Church Cathedral in Indianapolis, and Dean Stephen Carlsen says, for him, making these changes is faith-driven.

“As faith groups, we can all agree we are to love our neighbor as ourselves. That’s in all of our religious creeds,” Carlsen says. “And that doesn’t matter what neighborhood you’re from.”

“I’m glad we have a mayor and chief who are saying the right thing, but we still – not just what happened with this one man – people across this country and this city, people are in danger,” Barnes says. “People are scared. People are angry. People are furious.”

As others were gathering with signs, Whitley Yates used the rally as a teachable moment for her three-year-old daughter.

“A black man was killed by the police. Was that a good decision or a bad decision?” Yates says.

“And are the police supposed to hurt us or help us?” Yates says.

Faith In Indiana, Black Lives Matter, Don’t Sleep and Organizing For Action were among the groups that organized the event and intend to meet with Mayor Hogsett in the near future to address systemic racism.

Tags:Aaron AllanIMPDMayor Joe HogsettBryan Roach
Support independent journalism today. You rely on WFYI to stay informed, and we depend on you to make our work possible. Donate to power our nonprofit reporting today. Give now.

The board voted 5-2 Thursday evening on multiple counts in favor of Officers Michal Dinnsen and Carlton Howard in the June 2017 shooting of 45-year-old Aaron Bailey. 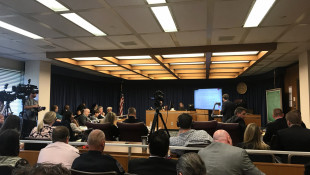 The officers say Bailey was seen digging in his car's center console, which they perceived as an imminent threat. Skeptics of their story suspect their decision to fire was driven by irrational fear.