Another Fight Between Mayor And Council Over Electric Cars, This Time It's BlueIndy

INDIANAPOLIS - City councilors are criticizing another contract Mayor Greg Ballard has signed over electric vehicles. The two sides are already headed to court over Vision Fleet, which is providing new cars to city employees. Now, contention is growing over BlueIndy, the electric car sharing programs for residents that’s about to launch.

Indianapolis is the first American expansion for Ballore, a French company that allows people to rent small electric cars at one curb-side location and drop them off at another -- similar to the Pacers Bike Share along the Cultural Trail.

But Ballore’s BlueIndy has been met with tepid Hoosier Hospitality.

BlueIndy doesn’t have the right kind of contract with the city, city-county council attorney Fred Beisecker told councilors this week, to take up parking spots and curb space for charging stations.

"The point is, that the BlueIndy contract goes way, way beyond anything that could theoretically, possibly be authorized or justified by an encroachment license," he said, adding the contract is "weak."

An encroachment license allows businesses to place signs or outdoor seating in public spaces. BlueIndy really should have a franchise agreement, according to Beisecker, which would require it to pay an annual fee.

"It’s not an analogous situation," he said. "When you look at ParkIndy, bike share, the valet parking, the signs, the awnings, all of those have been done with encroachment licenses over the past 15 or 20 years, and so we are merely following the precedent that has been set."

That’s just the first debate over the parking spaces. Another issue is the number of parking meters BlueIndy cars can eliminate.

The city has a contract with Park Indy to run those meters. A section of that company’s contract that says it has to be compensated if a certain number of metered are eliminated within the lifespan of its contract. Rosenberg says the city is keeping count.

"The thousand parking spaces aren’t all coming from the parking meter spaces," said Rosenberg. "These are all over the county, 200 locations throughout the county."

The council should be careful about killing a program that has the potential to attract people to Indy, warned east side Republican councilor Ben Hunter. "I just want to be careful that we’re not cutting off our nose off to spite our face because some process things didn’t go right," he said.

"We are concerned about how this deal was conceived," Clay said. "It could be a great deal, but it was conceived in a silo and delivered in blunt trauma over our heads, down our throats, saying 'it’s a good deal, deal with it.'"

BlueIndy plans to eventually have 500 cars available for rent in 200 locations ranging from downtown to the airport. Some of those spots are in popular business districts that have limited parking. And that’s infuriated several business owners.

"We’re collaborating deeply now with neighborhood leaders, we hope the council," said BlueIndy's Scott Prince. "I look forward to briefing everyone on the parking site locations as well."

But the company’s track record on working with businesses is mixed.

The owner of New Day Meadery in Fountain Square, Tia Agnew, said BlueIndy came to their neighborhood association and explained everything. "I think that’s a really good way to be a good partner," she said.

But Chris Eley, who owns Smoking Goose Meats on the east side, said he never heard a thing before stations were installed on the block. "This business (BlueIndy), for some reason or another, was essentially given a key to the city and didn’t have to go through all the steps," Eley said.

For now, only demo BlueIndy cars are available to test drive on Washington Street. But in a show of protest, the council is considering having them towed away. The cars are sitting on a stretch of street that’s technically no parking.

Tags:City-County CouncilBlueIndy
Support independent journalism today. You rely on WFYI to stay informed, and we depend on you to make our work possible. Donate to power our nonprofit reporting today. Give now. 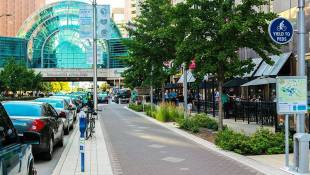 The Indiana University Public Policy Institute studied the trail's impact. It found that the total value for properties along the cultural trail has risen more than $1 billion since trail construction began 2008. 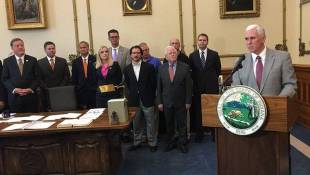