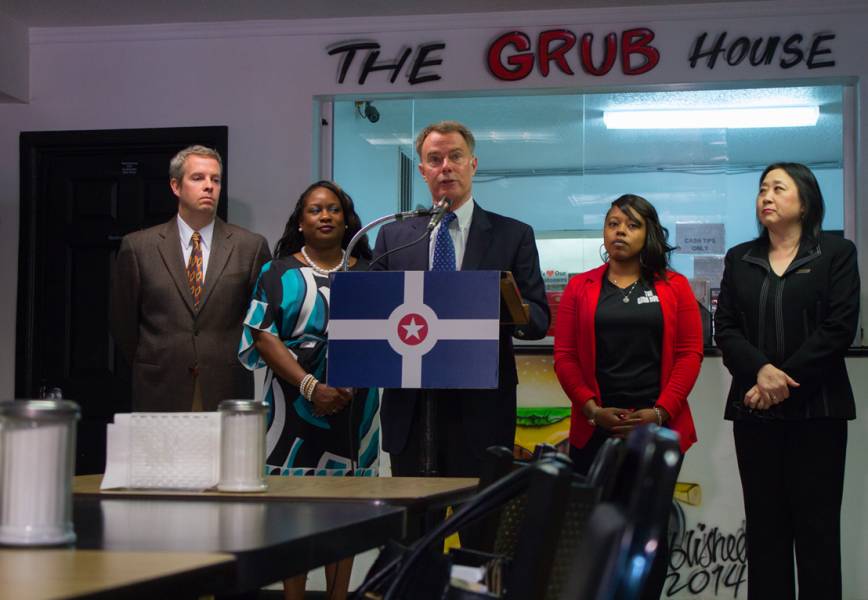 In a press conference Tuesday, held at the locally owned restaurant The Grub House, Mayor Hogsett focused on partnering with businesses in the hospitality, restaurant and food service industries to help teenagers get summer jobs. (Photo by Drew Daudelin)

In a press conference Tuesday, held at the locally owned restaurant The Grub House, Hogsett talked about partnering with businesses in the hospitality, restaurant and food service industries to help reach that goal.

And he talked about the long-term impact summer jobs can have.

A website set up at projectindy.net allows young people and local employers to sign up to connect with each other.

Hogsett says Project Indy isn't just about helping young people earn money and start their careers. He says it's about creating an environment that is welcoming to all.

"To be true leaders of our community we must resist the urge to pat ourselves on the back. Instead we must continue to act," Hogsett says.

The city runs Project Indy along with the Greater Indianapolis Progress Committee, the Marion County Commission on Youth, and EmployIndy.

Tags:Mayor Joe HogsettProject Indysummer jobs
Support independent journalism today. You rely on WFYI to stay informed, and we depend on you to make our work possible. Donate to power our nonprofit reporting today. Give now.