Hogsett Lays Out Public Safety Strategy, But 'Proof Will Be in the Performance'

INDIANAPOLIS -- Mayor Joe Hogsett is returning police officers to neighborhood beats, increasing use of data and going after the 1,400 people living in Indianapolis that have outstanding warrants for weapons or assault charges.

"These individuals currently walk freely in our city, but live outside the boundaries of the law," Hogsett at a press conference Saturday.

The newly-sworn in Democratic mayor spent his first full day on the 25th floor of the City-County Building meeting with local, state and federal law enforcement officials to lay out strategies for one of the three crises facing the city he discussed the day before in his inauguration.

"The crime data shows it and the fear that exists in our neighborhoods and throughout our community confirm it," he said.

The city will create a data center and restore monthly data meetings with different agencies and the public. That practice was started by Troy Riggs when he was public safety director but fizzled when he left for an academic job with IUPUI. He became Hogsett's police chief.

The city will also have a new homicide response task force made up of local and federal agents. Indy had its highest murder rate in 2015 in a decade.

Neighborhood policing will start in the city’s six focus areas, which have much higher rates of crime and despair than city averages. And those focus areas will expand from 8 square miles to 13, now covering the blocks where nearly half the blood in the city is spilled.

Those officers will be expected to walk their beats and attend community meetings. It’s a break from zone-based policing Hogsett said has failed. Community policing was a major peg of Hogsett's campaign talk on crime.

Designating community officers in the focus areas won’t take away police presence in other neighborhoods, Riggs said. "We are trying to find officers that we can move to those areas and not deplete other areas that are facing issues," he said.

Not specifically mentioned in the strategy is the how and when the 150 new police officers Hogsett also promised during his campaign will hit the streets, but Hogsett did say that number will be reached by the end of his first term.

The Indianapolis Fire Department announced it will be more proactive with community outreach, ramping up its Safe Places initiative and hosting more open houses.

Federal agencies in Indianapolis pledged to assist the city with its crime problem, saying its impact ripples beyond city lines. There are new lines of communication open and a new sense of unity, said Assistant U.S. Attorney Josh Minkler

"We go to work in this city. Many of us live in this city and raise our families in this city," Minkler said. "We are taking ownership of violent crime in Indianapolis."

As a former federal prosecutor himself, Hogsett said public safety is his most comfortable arena, but he asked for faith and time.

"The best-laid plans of mice and men sometimes go awry," he said. "The proof is in the pudding, it will be in the performance."

Tags:Joe HogsettMayor of IndianapolisIMPDTroy Riggscrime
Support independent journalism today. You rely on WFYI to stay informed, and we depend on you to make our work possible. Donate to power our nonprofit reporting today. Give now.

For years, tenants of Lakeside Pointe apartments in Nora have gone through existing channels to file hundreds of complaints.
Read More 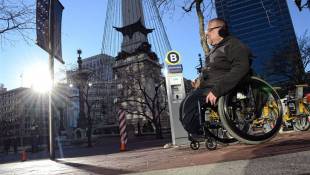 As new Indy Mayor Joe Hogsett held his first "public safety" summit Saturday, Richard Propes was rolling with his own message for Hogsett at Monument Circle - 122 trips around the circle, once for every child killed during the eight years under Hogsett's predecessor, Greg Ballard.