The protest to end police brutality and racial injustice almost made it to Gov. Eric Holcomb’s front door Monday night, just hours after he promised to work on a “to-do list” for
addressing systemic racism in the state.

A crowd of several hundred protestors defied the 8 p.m. city curfew and marched five miles from downtown to the the state-owned governor’s compound at Meridian and 46th streets. Dozens of local and state police officers in riot gear, with batons and pepper ball guns, formed a barrier at the intersection of the home, and around it.

A confrontation seemed likely. Indianapolis Metropolitan Police Department officers and protesters clashed the past three nights, after peaceful daytime protests. Much of downtown was damaged and vandalized.

The protesters, some on foot and others on bicycles, chanted "hands up, don't shoot."

Mass of protestors in stand off with police outside Indiana governor’s mansion. pic.twitter.com/3bPEbA3zQI

The marchers inched closer to the police line, even as they were ordered to disperse in 10 minutes. They refused. At one point police fired projectiles at a protestor but then some officers appeared to try and calm the situation by raising their hands.

“When black lives are under attack, what do we do? Stand up fight back,” the crowd chanted.

Soon, some in the crowd began to yell for the officers to march with them. Some protestors even called out officers by name.

IMPD Lt. Andrew Rolinson and one of the march leaders, Malik Muhammad, began to speak during the standoff.  Rolinson and Mohammad huddled between the protestors and the police.

“If I give you one block, we good?,” Rolinson said.
“Give us one block,” Muhammad said.
“Alright,” the officer said.

Rolinson agreed to briefly march with the group back toward downtown to end the standoff. The two embraced before they walked side by side through the throng of protestors and cars.

“Police are people - maybe they are not all bastards” - protest march leader. Video of IMPD making peace with protestors. pic.twitter.com/FXlHSsZB2D

After walking the block, protestors told Rolinson their intention is to protest peacefully. But he said anyone who has driven through the city, would disagree.

“Shots fired. Molotovs. A destroyed city that we all love. It should sadden all of us,” he said. “It should be our responsibility if we are going to a peaceful assembly to keep it peaceful. Right? We have to take an active roll to make sure. Not just the police -- all of us have to have that voice to keep it peaceful. That is how we make change.”

Muhammad said it was a compromise to walk away from Holcomb’s home with IMPD officers, but it kept everyone safe. He appreciated the IMPD officer’s gesture, but noted it was only one moment in a long fight for police accountability.

“I don’t know if he was just saving face or if he meant it. It is hard to tell because of what we have seen for the past couple of days -- immediately being gassed, just yesterday when we were in the circle,” he said.

Even though many protesters cheered the police joining them, some saw the display as hollow.

“Making this real clear,” Later, the account said. “We don’t shake hands with the enemy.”

BLM and protesters are demanding the release of the officer’s name who shot and killed the 21-year-old black man Dreasjon Reed earlier this month. A special prosecutor is yet to be appointed for the case.

Protesters plan to meet peacefully downtown every day this week. It is unclear if the curfew will continue.

Downtown, National Guard troops stood outside the Statehouse just before the curfew went into effect. 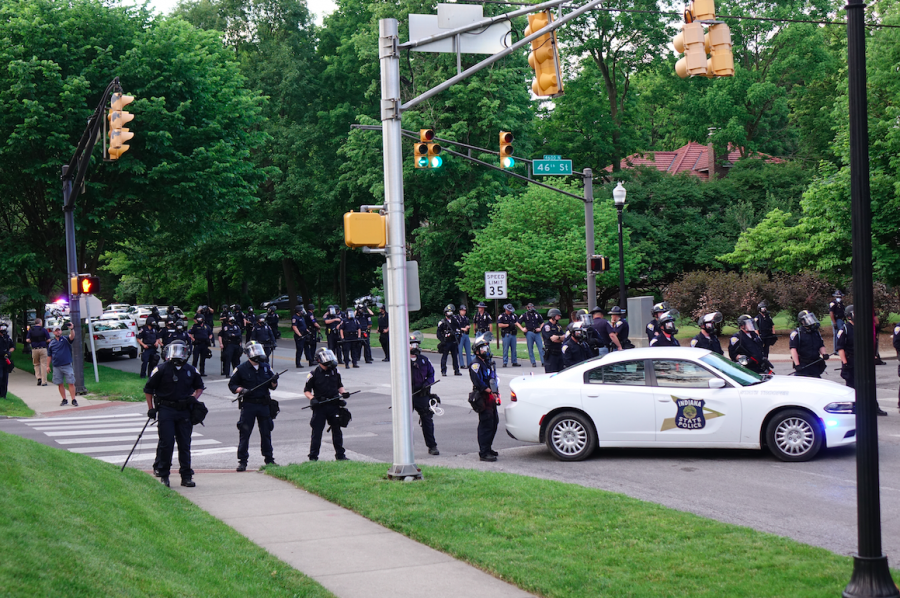 Tags:curfewIndianapolisIndianapolis Metropolitan Police Departmentracial justiceprotests
Support independent journalism today. You rely on WFYI to stay informed, and we depend on you to make our work possible. Donate to power our nonprofit reporting today. Give now.