INDIANAPOLIS -- Thousands of Hoosiers donated blood on Tuesday, World Blood Donor Day, but there is also an increase in drives because of the Orlando shooting.  The influx of donations comes during the summer when banks typically experience a shortage.

Jessie Scott signed up for a Indiana Blood Center donation event on Monument Circle in Indianapolis after the Orlando tradgedy.  He says he donates blood four or five times a year.

"I know that the local area has been in sort of a shortage in O negative, I’m O positive, not exactly what they’re looking for but every bit helps," Scott said.

There were about 60 appointments made for the drive and organizers said they were going to take as many walk-ups as they could.

President and CEO of the Indiana Blood Center, Charlie Miraglia says the blood collected at drives across Indiana will help.

"We’ll be using this blood first for patients in Indiana and then beyond our borders, wherever they need it," Miraglia said. "Unlikely Orlando because they’re so well stocked right now, but this blood will go to who needs it."

The center says it needs about 550 donors every day in Indiana to keep supplies fully stocked. People can can also donate at any of the seven Indiana Blood Center locations across the state.

Miralgia said any surplus of blood is redistributed to centers in need.

"That’s the beauty of sharing of blood, we share around the country those who have more blood can share with centers who are a little short," he said.

Tags:Indiana Blood Centerblood supplyOrlandoWorld Blood Donor Day
Support independent journalism today. You rely on WFYI to stay informed, and we depend on you to make our work possible. Donate to power our nonprofit reporting today. Give now.

The Indiana Hospital Association said the state's health system is strained by the delta variant's spread at a time when Centers for Disease Control and Prevention tracking shows Indiana has the country's 15th lowest rate of residents fully vaccinated.
Read More 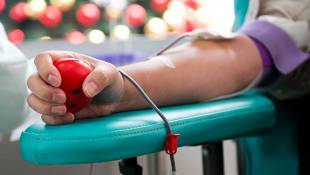 The FDA still requires that any man giving blood hasn't been sexually active with another man for 12 months prior to the donation date.