The Indianapolis Public Schools board unanimously approved a plan Thursday to overhaul the district by closing six school buildings, changing grade configurations and establishing eight middle schools. The new strategy will also provide, for the first time, all students in middle school with algebra and arts courses.

The decision comes after months of parent concerns and nearly 100 community engagement meetings, yet some still feel the plan falls short of its goal: to provide equitable schools and academic options to students of color.

The state’s largest school district has to juggle many obstacles as it works to boost students’ academic performance, address dwindling enrollment, repurpose poor facilities and reallocate its budget before it goes into the red in 2023. The district faces a $25 million annual deficit by 2027.

Now IPS hopes its Rebuilding Stronger plan will help curb those issues. School board members praised the community for its feedback and said the massive changes would improve learning for children of color and make the district equitable for all students, no matter where they lived in the city.

Superintendent Aleesia Johnson crafted the plan with administrators over the past year. Since becoming district leader in 2019, she’s sought to dramatically increase racial equity.

“I recognize that in this plan there are recommendations that will change how school communities are configured, what decisions families may be making for the future that are different than what they initially thought,” Johnson said. “Colleagues who may not be able to work together anymore. Those things are sad and they will be mourned.”

But Johnson said changes approved were vital to saving the district and giving students opportunities to succeed in school and life.

"The status quo is unacceptable,” she told the packed boardroom.

Before the vote, two of the district's strongest partners in reforms announced each opposed the plan. The Mind Trust – the local education reform group who developed charter school partnerships with IPS and the city, and Stand For Children Indiana – a chapter of the national advocacy group who’ve led program changes at failing schools, said the plan did not go far enough to help students of color.

Despite the contention, board president Evan Hawkins said IPS will continue to work with those organizations.

“The relationships with organizations like Stand and Mind Trust are more durable than Rebuilding Stronger,” Hawkins said. “Those strategic partnerships have been in place for a long time. And though we may not agree today at this moment, we will be coordinating, engaging [and] discussing future IPS opportunities as we go forward.” 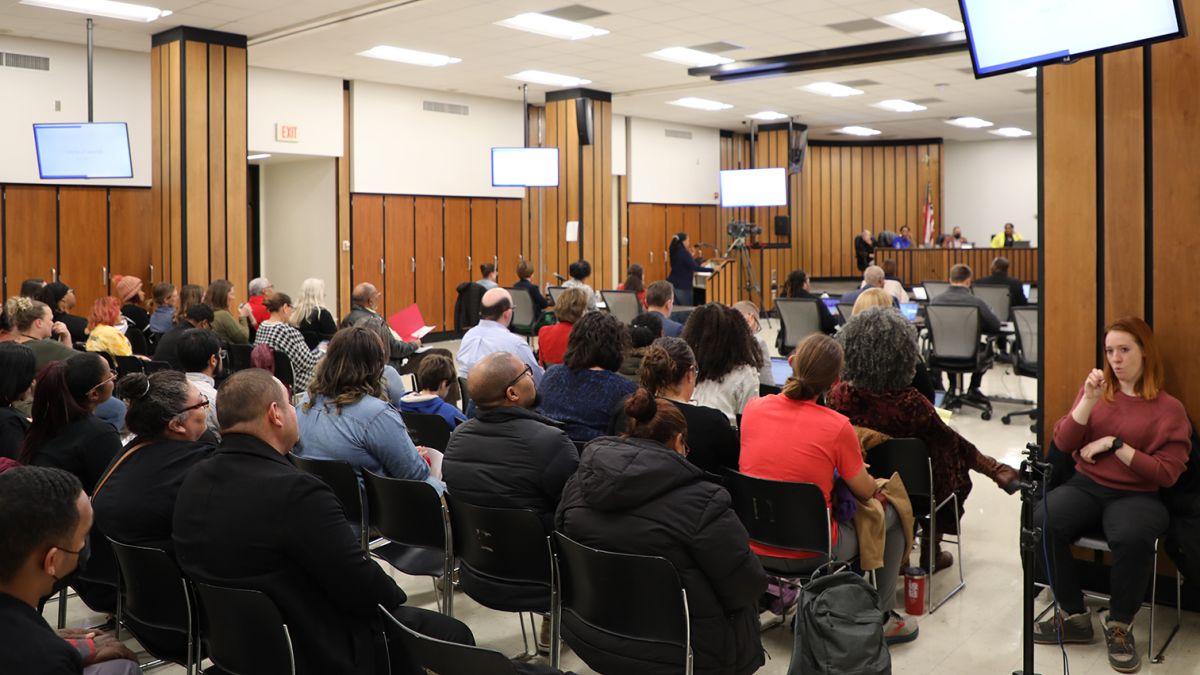 Before the vote, some hoped they could sway the board from what seemed an inevitable outcome. Alma Estrada told commissioners to vote ‘no’  because she believes the plan ignores the Latino, Hispanic and Black communities.

“I want you to help me change the face of my community to the point where I say ‘Jose,’ or ‘Juan’ you don’t see a construction worker,” said Estrada. “I want them to have [an] education.”

The board members voted 7-0 to approve the plan. Hawkins and two other members' four-year terms end Dec. 31. In January new members who won in the November election will be sworn in.

Here is a summary of what the approved restructuring plan includes:

The following six school buildings will close at the end of the 2022-23 school year:

Starting in fall 2024, many IPS facilities will no longer have K-8 schools, despite many parents’ opposition. IPS will reconfigure its grade levels to establish Pre-K or K-5 elementary schools and eight 6-8 middle schools.

Principal Allyson Peterkin of Daniel Webster School 46, a current K-8 school, said she loves her school community, but noted the challenges associated with that school model compared to elementary buildings that don’t serve middle schoolers. Parents have even told Peterkin the school didn't prepare some children for high school.

“My building was not designed for [the] K-8 model,” Peterkin said . “My kindergarteners and first graders had to share a bathroom with our seventh and eighth graders. I had to hire with middle schoolers in mind instead of all of my students in mind.”

IPS will create an advisory group of teachers from each program type to support principals with the planning of specialized middle school programs — such as CFI, Montessori, Reggio and STEM  program models. A separate parent advisory group will also be created during the 2023-2024 planning year.

According to board documents, the IPS board and staff will develop quantitative and qualitative “key performance indicators” as well as a timeline for schools to meet those goals and track the progress of the new changes.

The board will not renew innovation school contracts for SUPER School 19 and Urban Act Academy at Washington Irving School 14 after the conclusion of this school year. District officials cited low academic performance for ending its partnerships with both organizations. Teachers at these schools will have to reapply for their jobs, ultimately changing the culture within the buildings.

Next year, Paul Miller School 114 principal Daria Parham will lead the merger of her students at School 19 in the Near Southeast neighborhood. IPS staff are negotiating an innovation school agreement with the Near Eastside Innovation School Corporation to operate School 14 in fall 2023.

The district will also solidify a long-term agreement to operate the former Broad Ripple High School building. IPS will amend its agreement with Purdue Polytechnic High School to stay in the facility for the foreseeable future. Many parents have voiced concerns about having middle schoolers in the same building as high schoolers, who can be in their late-teens. 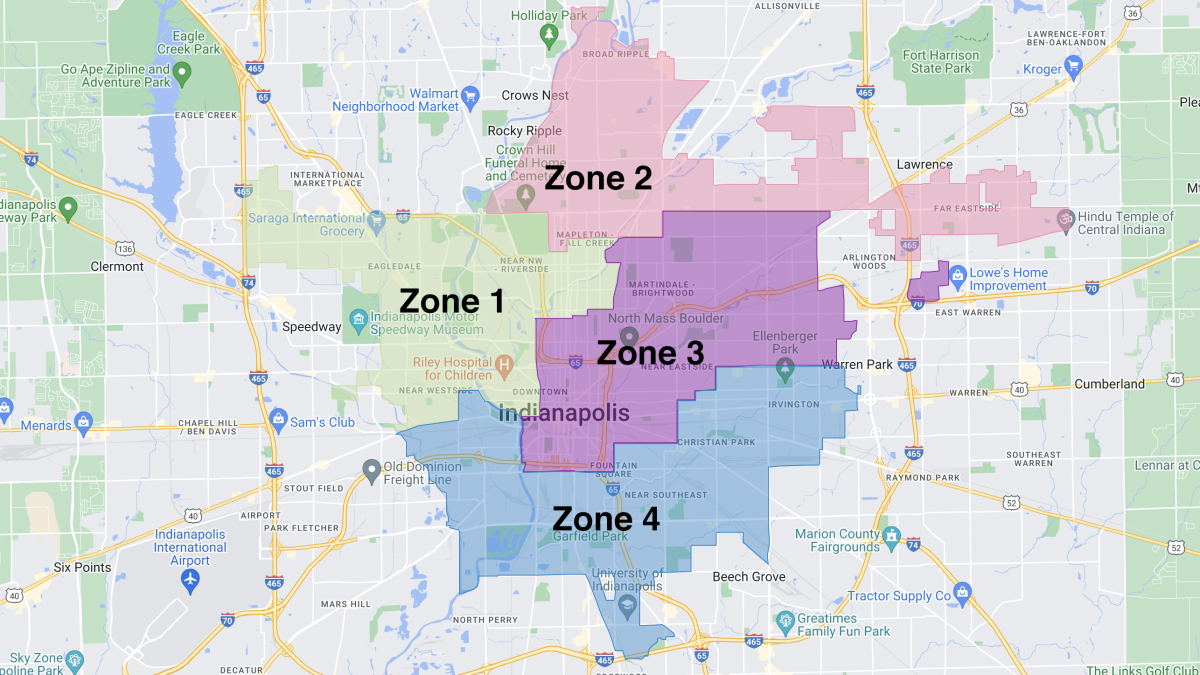 The district will also expand the criteria of which students qualify for the high-ability program, which begins in first grade, to include students who pass the entrance test in either English Language Arts or math. Currently students must pass both tests in order to participate in the program.

The change also ends the district’s proximity enrollment priority for the 2024-25 school year. Enrollment priorities provide preference to students who meet certain criteria, increasing the change students will be able to attend their desired school. Some parents of color have criticized the district’s proximity priority, which gives preference to students who live half a mile away from a school, which ultimately provides wealthier, White students with more access to higher-performing schools.

In an interview earlier this month with WFYI, Cortnei Flucas, unified student supports officer, said the goal is to have all special education programming in every zone.

That includes programming for children with disabilities aged 3-5, autism programming, intense intervention, life skills, and the district’s Arches program, which combines academic instruction with social and vocational skills for students with developmental and intellectual disabilities.

Flucas said that these programs are currently concentrated in certain geographic areas. She said the Rebuilding Stronger plan will broaden access to special education services.

“So what you would see in terms of an end product is that students are going to be able to access programming in every zone,” Flucas said. And she said students with disabilities will have the opportunity to attend schools that historically haven’t hosted special education programs, like the district’s International Baccalaureate and Montessori schools.


The district recently partnered with Early Learning Indiana to provide more than 80 children ages four or younger with access to an early learning program. More families will now have access to a pre-kindergarten program close to their home once IPS closes Francis Bellamy 102 – the district’s only Pre-K center. Those seats will be redistributed at schools across the district rather than at a single location.

The future of closed buildings

The fate of closing school buildings is still undecided. IPS is unable to sell the facilities for their projected worth due to a state law that requires unused buildings to be sold or leased to charter school operators for $1.

The district could decide to use the buildings to create administrative offices or for other operational needs, as storage, early learning centers, or in partnerships with charter schools. Adelante Schools, who already partners with IPS in a district facility, and Victory College Preparatory both have said they are interested in buildings planned for closure

Eddie Rangel, executive director of Adelante, announced his intent to open a school at the Raymond Brandes School 65 during the Thursday meeting.

IPS will begin a community engagement process to determine the future of those buildings. Johnson said they will decide whether to operate or sell the buildings by the end of the current school year.

The IPS board of commissioners passed a major plan to overhaul the district, but parts of the plan, such as the construction of new buildings, may not be completed without community support of more than $800 million in property tax referendums. The board is expected to vote Dec. 6 on a decision to put a $410 million capital referendum to cover the cost of new facilities and building improvements, and a $400 million operating referendum for staff compensation on the May 2023 ballot.

Tags:ipsRebuilding StrongerSchool ClosureThe Mind Trustcharter school
Support independent journalism today. You rely on WFYI to stay informed, and we depend on you to make our work possible. Donate to power our nonprofit reporting today. Give now.